I love my boyfriend. We have a solid relationship built on love, trust, and mutual care of our three cat overlords. I say this because sometimes when you have cats things…happen. And when said things happen (read poo gets stuck in fur, fur must be cleaned), it’s usually a two-person job. Thus I have learned, over time, how bathing a cat shows what kind of relationship you have. 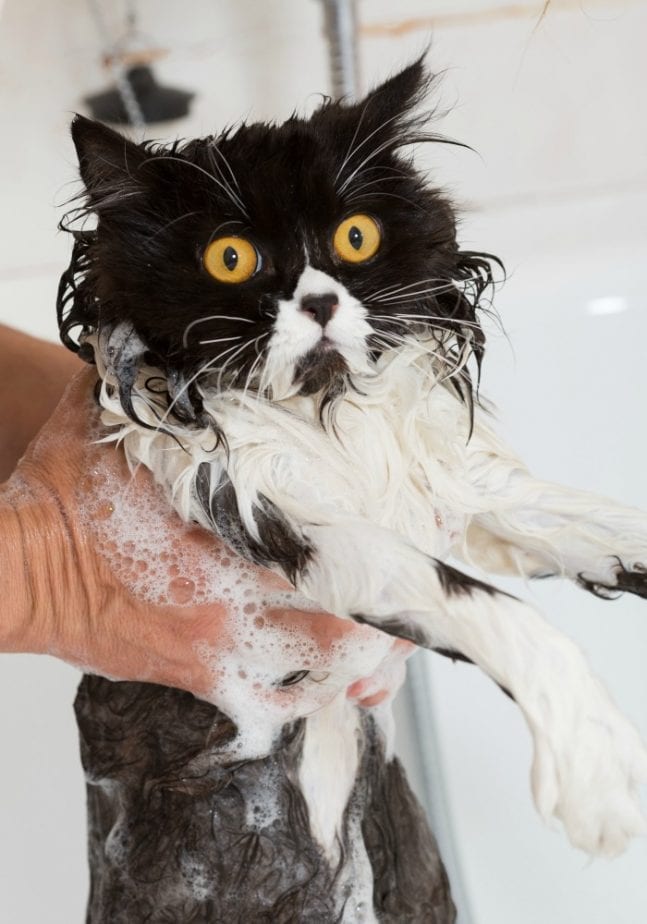 How Bathing A Cat Shows What Kind Of Relationship You Have

Today, as I sat down to write up a few posts, my boyfriend bellowed my name.

Now, this isn’t an unusual thing. We’re pretty good about communicating when I’m writing for work, and when I’m just farting around in my office. On top of that, there are different kinds of bellowing my name across the house.

There’s the, “I saw something really cool on Facebook/YouTube/Instagram/the cat box and you have to see this,” bellow. There’s usually a laugh in there.

There’s the, “I’m super excited about this thing and you must see it now,” bellow.

There’s the, “I’m supposed to be doing or lost something and need help,” bellow.

And finally there’s the, “I saw a cockroach and you have to handle this,” shriek.

This was none of those.

This was one of those Oh-Holy-Cheeze-Whiz-Get-In-Here-Now-Because-Something-Has-Gone-Terribly-Wrong-And-I-Have-No-Idea-What-To-Do bellows.

Needless to say I dropped everything mid-sentence and rushed into the kitchen where I’d left my boyfriend and the kiddo eating lunch.

The kiddo is sitting at the table, sort of bewildered looking. And my boyfriend is standing in the entry between the living room and kitchen like he’s prepared for a football rush. I look around…and don’t see anything immediately wrong. There’s no standing water. No blood. No fur.

My boyfriend then informs me that, “There is doo-doo leaking out of the cat’s butt!”

In our family I’m usually the one who handles anything gross-pet-related. The bellowing had alarmed our two year old Maine Coon, Rand, enough that he’d retreated to the farthest corner of the kitchen behind the dining table giving my boyfriend The Cat Side Eye and wouldn’t let me near him. It took some coaxing but after a few moments I was able to convince the furry butt-head to let me close enough to investigate.

Now, anyone who is a cat lover and crafter knows the danger of having yarn out and about. It would just so happen that the night before I’d broken out my shawl project I hadn’t touched in a while. There was, in fact, a chunk of poop matted into the cat’s fur…and a bit of yarn coming out of the hind end. Awesome. Since I could identify the yarn on sight, I wasn’t terribly alarmed since it was a very short piece and there couldn’t be much more in him because a lot of it was already being passed. (Side note: yarn or other long, stringy things can cause intestinal damage in animals and children, so please, store your stuff responsibly.)

This is where you learn how solid your relationship with your significant other really is.

We really only had one option, Rand was going to lose some fur. When a cat is that fluffy, this is bound to happen from time to time. Sanitary trims are a pain, but they save you hours of cleaning up accidental poop from furniture.

We decided that I would do the holding and my boyfriend would do the cutting. Since I only had one pair of gloves leftover from my latest hair episode, he got those.

Now, when you’re having to do a job this big, communication is key. Yes, at least one of you is going to get frustrated, but being able to let the holdee know to grab that leg, tweak the tail this direction, and so forth is great problem management and communication skills. I can think of a number of professional situations that would have benefited from a  little cat clean up exercise to strengthen team building. Besides there’s few things that bond two people together more than holding down a fuzzy little demon.

Moral of the story? Craft responsibly. Have a stock of plastic gloves on hand. And do the sanitary trims before you really have to. They’re a lot easier to do if you aren’t also trying to hack large chunks of poop off the furry overlord. 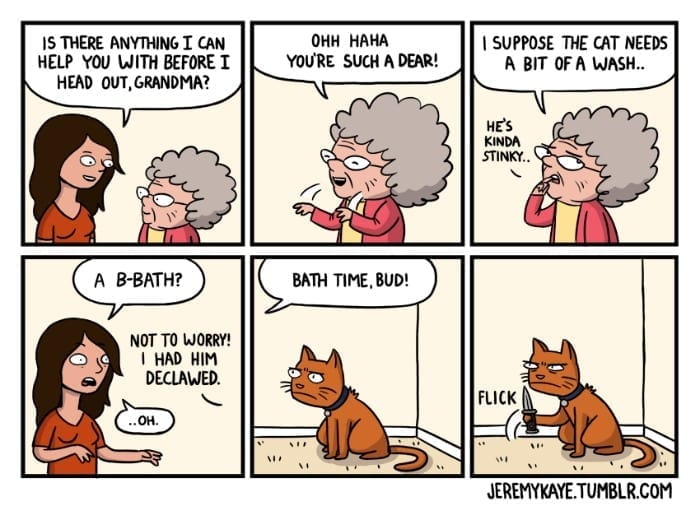