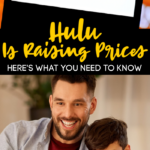 I’m about to have to make some decisions, everything is going up in price and it’s time to do some bill trimming.

It doesn’t seem like it was that long ago that Netflix increased prices, now starting in October your Hulu bill will also be higher.

The Hulu price increases are on Ad-Supported and Premium plans.

Thankfully, the Hulu price isn’t increasing drastically and they remain one of the more affordable streaming services, but man every penny counts right now.

Netflix starts at $9.99 a month and its premium option is $19.99 per month, with a reduced price ad-supported option coming soon.

Disney+ and ESPN+ subscription prices will also raise since they are owned by the same parent company as Hulu.

Disney+ will have an ad-supported plan available starting December 8th that will cost $7.99 per month.