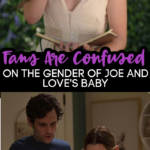 If you’re like me, you’ve ben waiting ANXIOUSLY for Season 3 of You to come out! How could you not be?!

HOWEVER…we’ve come to a strange issue. Although Joe has already stated that he is having a son named Henry, there’s been mention of a daughter before…

If you remember the end of Season 2, Joe is walking around his new home talking about…his DAUGHTER. The fact that he’s about to have a DAUGHTER. WHAT?!

Fans are taking to TikTok in mere confusion over the fact that Joe was talking about the coming birth of his daughter, but now is saying it’s a son…so what gives?

I’ve re-watched the ending of Season 2 and it’s right there. Joe talks about being a good father to her and giving her the life SHE deserves. So where is a son named Henry coming from?

It can mean one of two things. First, that they changed their mind and hoped we wouldn’t notice, or there’s another baby out there…

Although the first option is more likely, the second would fit the show’s narrative WAY better. If this was just a mistake, I’m sure they’ll pass it off as Joe assuming it was a daughter but it being a son.

Either way, they’ve opened Pandora’s box and fans have LOTS of questions, including me.