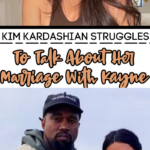 As we all know, Kim Kardashian and Kayne West are splitting after six years of marriage and four kids later.

Most recently on the farewell season of Keeping Up With the Kardashians, Kim was trying her hardest to suppress the stress from her marriage with Kanye West, specifically including his involvement on Twitter.

“It’s no secret that everyone sees things in the media about my life with Kanye, but I’ve always been really respectful in not talking about issues that Kanye and I have. I mean, you guys clearly see them on Twitter, so I’m still gonna choose to not really talk about it here,” Kim said in KUWTK.

Kim Kardashian even went as far as stopping herself from going into detail about the struggles of her marriage with her sisters because she didn’t want to talk about it on-camera.

Even though her sisters know that Kim is calm and cool in stressful situations, Khloe has admitted that she is concerned for Kim.

“She’s someone who’s, like, calm and cool, and we all respect that. But I know, because she’s not talking about it even to us privately, that it’s really affecting her.”

The entire Kardashian family understands how much pressure is currently weighing in on Kim and while Kris suggested that they do something nice for Kim to put her mind at ease, her sister Kourtney also stated that she thinks Kim needs support to get through this tough time.

“There’s a lot going on in the media right now, and Kim is going through a really, really hard time, and she’s dealing with a lot internally. I think my mom’s idea to get Kim to have a good time is really cute, and that’s what we’re gonna do,” shared Khloé.

1shares
Some People Are Only Getting Half of Their Stimulus Checks
← Previous
You'll Be Able To See The Pink Supermoon In April, Here's How!
Next →
Click here to cancel reply.