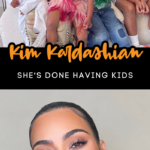 Kim K just can’t seem to stay out of the news.

Whether she is wearing some crazy outfit to the Met Gala, breaking some obscure parenting rule, or even dying her eyebrows a very unnatural color. Everything the girl does is fodder for the tabloids.

What has she done NOW, you might ask. Well, this time it’s pretty tame.

Kim was spending some time on the Ellen show, and she casually announced that she is DONE having kids.

She’s happy for her sister, Kylie, who is pregnant with her 2nd child with Travis Scott, but she isn’t succumbing to the baby bug.

Ellen asked Kim if the Kardashian Jenner clan would see another set of triplets — the name they lovingly call Chicago West, Stormi Webster, and True Thompson who were all born within one month of each other.

We should try for another set of triplets. Maybe another sister, I have other sisters. And a brother. Maybe someone should!

She was definitely saying that SHE would not be part of that triplet-making party — she is leaving that to her siblings.

Kim K says she’s done!! No more kids for her.

Well, it’s a good thing! Kim has about eleventy billion projects going on simultaneously, and I don’t know anyone that could keep up with it all — then you throw kids into the mix. It just gives me a migraine.

The social media mogul already shares four kids with her ex (is he REALLY her ex?), Kanye — ‘er — Ye.

Quick, can you name them all? There’s West, Saint, Chicago, and Psalm.

Barring any little slip ups (accidents DO happen), those are all the mini Kim Ks we’re going to get.

But, that doesn’t mean we can’t obsess over Kylie’s new baby! Gah!! I can’t wait!!