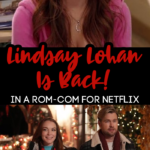 It’s been a long minute since we’ve seen anything acting-wise from Lindsay Lohan!

She took one heck of a long break and hopefully was able to get her life back on track.

I have always loved her movies and have watched them all with my kids, and I am super excited to see her back in the movies again!

taking back the life that I worked so hard for and sharing it with my family and you guys.

Back in May of this year, Lindsay revealed that she was returning to acting with a role in a Christmas romantic comedy for Netflix.

They’re both dressed for winter and there are Christmas decorations, so far the movie is still untitled.

Newly engaged, spoiled hotel heiress, who gets amnesia after a skiing accident and finds herself in the care of a handsome, blue-collar lodge owner and his precocious daughter in the days leading up to Christmas.

according to the logline

We can look forward to watching the new Lindsay Lohan movie sometime during the 2022 holiday season streaming on Netflix.