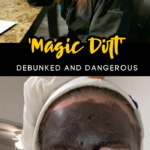 We’ve all fallen prey to the world of Multi-Level Marketing companies at some point — some of the MLMs are legit and some of them are just off the wall insane-balls.

During the height of the pandemic, you might have heard of ‘Magic Dirt.’ It was basically a cure-all for health problems.

People took to Instagram and Facebook, touting the wonders of this supposed “end product and smallest particle of the decomposition of ancient, organic matter.”

They said it was “60,000+ years old,” and could heal everything from headaches, to brain function, and even to heart health.

What is ‘Magic Dirt’?

It was basically a bag of dirt. A very expensive bag of dirt that went for $110 a baggy full.

People seemed to think that it was a “fountain of youth” of sorts, posting pictures of them drinking it, brushing their teeth with it, and even bathing in it.

It was a “A gift from the Ground,” as the website claimed.

But, was it? Or was this just some crazy gimmick that’s akin to the “Snake Oil” of old — promising a cure but never quite delivering.

[One customer] said that for two months she dissolved a half-teaspoon of the black stuff in a glass of water and drank it every day. But unlike people in her new BOO Facebook group who posted miraculous testimonials of cured diseases, weight loss, clearer skin, whiter teeth, regrown hair, reclaimed energy, expelled worms and even changes in eye color (from brown to blue), [she] didn’t feel like any toxins were leaving her body. In fact, she started having stomach pains.

Something that was supposedly supposed to heal her gut problems was actually making them worse. She began to doubt the “magic” of this dirt.

But, this glorious dirt had developed a cult-like following (think LuluRoe). Sellers would censor her complaints when she would try to tell them it wasn’t working and was actually making her sick.

Nobody wanted to hear that this dirt was a bunch of hogwash.

Heck — people were feeding this to their dogs, their kids, they were baking brownies with the stuff — all hoping for that magic cure-all that would heal everything that was ailing them.

BOO [this “Magic Dirt”] can cure everything from autism to cancer to Alzheimer’s disease. Conveniently in these times, BOO proponents say it also protects against and treats Covid-19, and can be used to “detox” the newly vaccinated

Now, Black Oxygen Organics products [BOO] couldn’t be bought in stores. You had to go through an individual who sold the stuff — and then tried to recruit you to sell it too.

Are you thinking “Pyramid Scheme?” You would be correct.

“I don’t feel like people are stupid,” [Ceara] Manchester [an anti-Boo advocate] said of the people who purchased and even sold BOO. “I think that they’re desperate or vulnerable, or they’ve been preyed upon, and you get somebody to say, ‘Hey, I’ve got this product that cures everything.’ You know when you’re desperate like that you might listen.”

Health Canada declared a recall of all Black Oxygen Organic tablets and powders. They said it was a “potential health risk which may be higher for children, adolescents, and pregnant or breastfeeding women.”

Instead of being great for everything that ails you, the dirt was shown to have “elevated levels of lead and arsenic.”

So, as you can imagine, just before Thanksgiving, BOO shut its doors — leaving thousands of dollars worth of the BOO product never delivered!

Another MLM bites the dust.

I do feel horrible for those people that were left in the lurch by the company. Hopefully they can just move forward and leave this fiasco behind them.