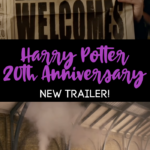 I have so many friends that are obsessed with Harry Potter…

I feel bad because I haven’t even watched one entire movie of Harry Potter, nor have I ever read the books!

I know… I need to get on that ASAP!

There is a ‘Harry Potter 20th Anniversary: Return to Hogwarts’ special coming out on HBO Max in January and the excitement I see is REAL!

The first trailer for the special was released back in November of this year, and this new one features Emma Watson, otherwise known as Hermione Granger!

The special will celebrate the legacy that the franchise started, I don’t think I have ever seen a fan base so dedicated as you Harry Potter folks!

Celebrate the unparalleled legacy of the Harry Potter film franchise and its indelible impact on the hearts, minds, and imaginations of families and fans around the world. according to a release.

I also read that the author, JK Rowling, is not part of the lineup for this special so far.