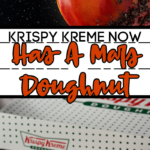 In celebration of NASA’s Perseverance Rover landing on Mars, Krispy Kreme has created a one of a kind doughnut to celebrate history being made this week!

Let the countdown to Mars begin!

For one day only starting and ending on February 8th, Krispy Kreme has baked, shaped, colored and sprinkled with all things sweet, the Mars Doughnut!

The Mars Doughnut is the new sweet treat designed to look like the red planet featuring caramel icing with a red planet swirl, chocolate cookie crumbs, and stuffed with sweet chocolate kreme!

In addition with the limited edition doughnut, you may be able to get the red planet for free and here’s how!

If you were one of the 11 million names that signed up to send your name to Mars, bring your boarding pass (the one that NASA should have sent you when you initially signed up) and Krispy Kreme will give you the doughnut for free!

The goal of NASA’s Perseverance Rover is to seek signs of ancient life, collect rocks, soil samples and get this, by the time the rover lands in the next two days, it will have traveled 292.5 million miles.

63shares
This Clover Cold Brew From Starbucks Will Have You Feeling Lucky This Season
← Previous
'Fauci-ing' Is The New Hot Dating Trend and We Are Here For It
Next →
Click here to cancel reply.