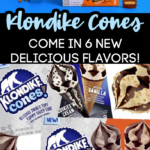 About a year ago, Klondike introduced Klondike Cones and they are sooooo good!

They were so popular that the brand decided it was time to add even more flavors for a bigger selection of choices when it comes to getting an ice cream cone.

These newest flavors of Klondike Cones released sound so amazing and I can not wait to try them!

I have to say that I am most excited about the two Reese’s varieties and those are the two that I personally want to try first.

Which flavor of the new Klondike Cones are you looking forward to trying first?

The new Klondike Cones flavors are already showing up in local stores, so keep your eyes peeled for them!

The Klondike Cones come in an 8 count package and sell for about $7.49 per box and you can find them in 4 count boxes for about $4.49 each.