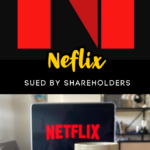 A class action lawsuit has been filed against Netflix, because their shareholders are upset.

So what does this mean for the streaming service?

The suit, which alleges that Netflix “made materially false and/or misleading statements,” was filed in the United States District Court for the Northern District of California.

What does that even mean?

Well, it basically means that the Netflix shareholders think that Netflix did or said some things that cost these shareholders a bunch of money.

[They] made materially false and/or misleading statements, as well as failed to disclose material adverse facts about the Company’s business, operations, and prospects.

These shareholders are saying that Netflix painted too rosy of a picture when it came to business, operations, and prospects.

Netflix said things were great, but they weren’t.

The shareholders lost money, and they are pissed.

In actuality, Netflix was dealing with “slower acquisition growth” and they were having some major “difficulties retaining customers.”

In this lawsuit, they are looking for investors that “purchased or otherwise acquired Netflix, Inc. common stock or call options, or sold put options, between October 19, 2021 and April 19, 2022.”

What are they hoping will happen?

Well, they are wanting “compensatory damages…for all damages sustained as a result of Defendants’ wrongdoing, in an amount to be proven at trial, including interest thereon.”

Of course, we will let you know if and when anything happens with this lawsuit against Netflix.