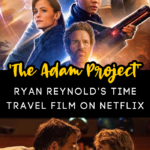 We have to immediately talk about something: The Adam Project. I am obsessed!!

Y’all. I grew up in the 1980s. We had movies like Back to the Future and Flight of the Navigator. When I see most movies, they get compared to those kinds of classic movies.

The Adam Project TOTALLY stacks up. It is so good.

It has the action, the humor, the story line, the magic, and — let’s face it — Ryan Reynolds.

I’m gonna go ahead and say it. I’ve never seen a bad Ryan Reynolds movie. He is funny, he is a great actor, and he is pretty. Yes, I said it, he’s pretty.

So, The Adam Project is about a fighter pilot from the year 2050. Space travel is a common thing, and apparently so is time travel.

Right off the bat, something happens, and Adam (Ryan Reynolds) travels himself to 2018.

Not only has he found his way back to 2018, but he ends up at his old house. It is at this house where he runs into 12-year-old Adam.

As you can imagine, Adam has to explain to — well, Adam — who he is, and where he’s come from.

It’s rather humorous (that dry Ryan Reynolds humor), because older Adam is annoyed by younger Adam.

But, it turns out that older Adam needs younger Adam’s help. He needs to get to the correct moment in time, and younger Adam’s DNA is the only thing that will help him.

Somewhere in the process, the people that were originally following Adam in 2050 find him in 2018. They want to bring him back to the “present” time, but Adam still needs to get to where he is going.

I’m not going to give away the rest of the story. But, if you need something to watch, The Adam Project is where it’s at.

The Adam Project is like a 13 Going on 30 Reunion!

We have to talk about something else. Jennifer Garner and Mark Ruffalo are both in this movie. And, y’all!! They are married!!

It’s a straight up 13 Going on 30 reunion!! I like to think that it’s what happens after 13 Going on 30 ends. LOL!! They get married, and have a son named Adam, and the rest is history.

Another notable person in The Adam Project is Zoe Saldana. You know her as Gamora from Guardians of the Galaxy. She is great as Laura — and I wish I looked like her.

You can check out the trailer for The Adam Project below. But, get on Netflix, and start watching it NOW!! You won’t regret it.

p.s. You might want to watch it before you let the kids see it. It has some language that you might not want the little ones hearing.