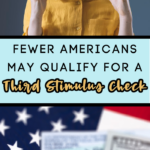 We have a NEW update on the third round of stimulus checks that we have been hearing rumors of.

They are supposedly coming — maybe — and this new stimulus package could pass as early as March 14th.

However, these payouts are probably going to look a little different than we have previously received.

The House and the Senate may be narrowing the income requirements for receiving stimulus money, which would mean that many people who would otherwise receive checks won’t be getting them.

11.8 million fewer adults and 4.6 million fewer children would get payments compared with an earlier version of the relief bill that passed the House last week, according to estimates by the Institute on Taxation and Economic Policy.

NOW, the government MIGHT be backing off of those previous income caps, meaning that you may not get a check if you make too much money.

The tweak is a goal of moderates who did not want the checks to go to wealthier Americans.

Then, you run into the issue of what is called “phase out.”

There is going to be a pretty tight “phase out” window that decides if income earners will receive a full check, a reduced check, or nothing at all.

Now, according to AS — which is a daily newspaper in Madrid, Spain — “President Biden approves limiting $1,400 checks to individuals earning less than $80,000 with no phase-out.”

The President promised and committed to ensuring that the American people receive $2,000 in checks — this $1,400 is part of delivering on that promise. He has also been clear that he is open to changes on the margins of his package, while he is very firm on the $1,400.

BUT, the package ultimately has to pass the Senate and the House before it becomes an actual living thing.

I’m not going to lie, this whole stimulus package is pretty dang confusing.

I’m glad that someone else knows what the heck is going on, because I can get lost REALLY quickly.

Basically, to sum up, we are definitely (maybe) looking at checks coming to the people that really need them — the lower income earners.

Those higher income earners are the ones who are in limbo at the moment. They may or may not receive stimulus money.

We will just have to wait and see how this plays out.