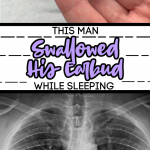 This is a crazy story… This guy named Brad Gauthier from Worcester (near Baltimore) is warning people to not wear earbuds while falling asleep!

Brad went to bed wearing his earbuds so that he could listen to music. After waking up the next morning, he went out to shovel the snow.

At this point he has no idea that something bad has happened. It isn’t until he goes back inside the house for a drink of water.

This is when he knew something just wasn’t right. The water would not go down!

He had to actually lean over and let the water run back out of his mouth.

Then he noticed he was missing one of his earbuds! At this point, his son asked if maybe he had swallowed it!

They headed to their local emergency room where he had an x-ray done to see just what the issue was.

The x-ray showed that he had indeed swallowed the earbud in his sleep! It was lodged in his lower esophagus!

He had to have an emergency endoscopy done to remove the earbud from his esophagus. The crazy thing is, he only had minor discomfort… like he totally did not know that something was stuck in there!

He could have choked to death and died, this is just crazy to me! I’m so glad that I use actual headphones in bed.

Brad Gauthier of #Worcester went to bed Mon. night wearing his #airpods, woke up next a-m & one was missing. He went to sip some water & noticed he couldn’t swallow. A trip to e-r revealed he had swallowed the missing ear bud in his sleep. He had emergency surgery to remove it. pic.twitter.com/G0I6dkqJ8U