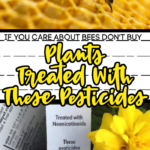 Everyone is posting about gardening and planting flowers, you know… spring things! Well, there are some things you may want to consider when shopping for your plants.

Neonicotinoids are the most widely used insecticides. Apparently they are really bad for our pollinators and this includes bees.

When I saw the post above on Facebook, I had to look into it and see for myself. I’m already pretty natural about everything, when I garden, I do it pretty old-school.

So, Neonicotinoids… let’s get down to it!

The name literally means “new nicotine-like insecticides”.  Like nicotine, the neonicotinoids act on certain kinds of receptors in the nerve synapse.  They are much more toxic to invertebrates, like insects, than they are to mammals, birds and other higher organisms.

Well, that sounds pretty awful! As a person with neuro diseases including jacked-up nerve synapse, it sounds pretty scary. I definitely wouldn’t want it sprayed on my foods or around my home on my plants and flowers.

Anyhow, we’re here to talk about our pollinators. Bees are so important to our world and yes, there are other pollinators and they can also be affected by this insecticide.

If your insecticide has one of these ingredients listed, then it is a neonicotinoid.

What do neonicotinoids do?

At first, the neonicotinoids were listed as low-toxicity to many beneficial insects, including bees. But then there were other studies done and well, there are some huge issues.

…evidence that systemic insecticides, a common way to protect crops, indirectly harm these important pollinators. Two field studies reported online this week in Science document problems. In bumblebees, exposure to one such chemical leads to a dramatic loss of queens and could help explain the insects’ decline. In honey bees, another insecticide interferes with the foragers’ ability to find their way back to the hive.

I also read that the following happened to the bees during field studies.

Anyhow, it’s definitely something we should consider when planting. If what we are planting is sprayed with this, then we are impacting our pollinators. These pesticides are banned in other countries.