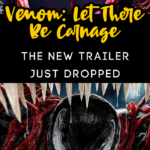 The new trailer for Venom: Let There Be Carnage just dropped, and this film looks like it’s going to be so good!

Now, I am relatively new to the world of superhero movies, so when I saw the still photo for this film, I stupidly thought it was a horror movie. LOL!!

Venom: Let There Be Carnage is actually the SECOND Venom film to be released by Sony Pictures as a Marvel sequel.

Venom is Spider-Man’s arch enemy — but he isn’t associated with the Tom Holland’s Marvel Cinematic Universe (MCU) version of the character.

Okay, stick with me. Venom is an alien symbiote, meaning he is like a leech that attaches to another human, taking that host over and creating a single entity.

So, at some point, Venom attached to Spider-Man, turning the hybrid of the two entities into the lethal protector, Venom.

But, this wasn’t the Spider-Man from the giant MCU as we know it. This is the Sony Pictures alternate universe Spider-Man.

I told you — it’s complicated.

Let’s just deal with this film, shall we?

So, this is a superhero type film — or supervillain, if you will.

Now, don’t get confused. This film stars Tom Hardy — not to be confused with Tom Holland. LOL!!

Eddie Brock (Tom Hardy’s character) is trying “to reignite his career in investigative journalism by interviewing incarcerated serial killer Kasady (Woody Harrelson) to find out where the bodies are buried.”

When Kasady (Woody Harrelson), the serial killer, receives a lethal injection in prison, it appears to awaken a symbiote inside of him. This new hybrid is the supervillain that is Carnage.

This film promises to be full of carnage (and Carnage), and looks like it is going to be one hell of a ride.

Now, if you haven’t seen the FIRST Venom movie, you might want to do that before you head on out to this film. It will explain things far better than I ever could.

Venom: Let There Be Carnage is set to hit theaters September 24th, and that is the ONLY way you can see it right away. No streaming service download for THIS new release!

You can see the NEW trailer for Venom: Let There Be Carnage right HERE.

*Let me say that I am NOT a Venom expert. Everything I know about the film, my nerd-o, comic-book loving husband schooled me on. Forgive me if I royally messed it up. Just go watch the films. Ha!!