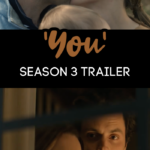 Love and Joe are the parents you wish never had.

The new trailer of You season three has finally released and it’s bloodier than ever.

While the new couple have agreed to move to the suburbs for a fresh start, Joe and Love’s old habits unsurprisingly have followed them from the city.

Shortly after Henry is born, Netflix’s two minute trailer shows a glimpse of Joe and Love’s new parenting life and lets just say it doesn’t look like the two will have their fairy tale happy ending.

Shortly after moving into a brand new house, we see Joe become obsessed with the new neighbor Natalie we know this, but what we didn’t know until now is that Love’s jealously might have gotten the best of her in this season, yet again.

We also see a ton of unfamiliar characters who all are unfortunately wrapped up in Joe and Love’s family drama and it even looks like the two are trying couple’s therapy to work out their um, issues.

Throughout the trailer it’s hard not to notice that the phrase “we’re a team” is continuously mentioned and right before the trailer ends, Love quotes “till death do us part”, while the two bury a dead body in the middle of the woods with their baby strapped in a car seat a couple feet ahead.

Netflix’s hit series ‘You’ starts streaming season three on October 15th but before then, you can watch the new trailer, here.