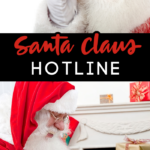 Sending letters to the North Pole takes a longer time reaching Santa Claus directly, and while the big jolly guy will receive your kid’s letters at some point during the holiday season, nothing beats a one on one phone call with Mr. Claus.

So forget the stamps and use the keypad on your phone instead.

As it turns out, Santa has a regular cellphone like you and I and regardless of whether it’s an Android or iPhone, he can be reached from all the way to the North Pole.

Considering Ol’ Saint Nick is busy all year round packing toys, checking lists twice, and delivering presents around the world, don’t be surprised if you get his voicemail.

Although don’t worry if you do reach his voicemail, Santa’s phone number allows your kids to leave a message after the beep asking questions of their own or reading off their Christmas wishlist and saying hi to Rudolph.

Shortly after your child leaves a voicemail for Santa, the guy in the big red suit will even text back.

Thanks to FreeConferenceCall.com which runs the holiday hotline, Santa is available 24 hours a day, seven days a week for a phone call!