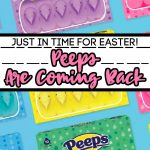 You either love or hate Peeps.

I happen to love them, like when I buy them for the kids, I also get several extra packs so that they can share with me.

Last year Peeps had to stop production because of COVID-19. They also stopped production on Mike and Ike as well as Hot Tamales.

Usually, during the holidays there will be special Peeps released, but sadly we did not see that last year for Christmas or even Halloween.

Boo! There won’t be Halloween #PEEPS until 2021, but we’ll be with you in spooky spirit! Stay tuned this October for fun #Halloween activities to fill your season with #PEEPSONALITY ??? pic.twitter.com/LkiPbDS6Tn

Peeps is back and better than ever! We’re thrilled to be returning this Spring to fulfill special Easter traditions, no matter how you plan on celebrating this year.

Peeps are coming back!

There is good news for Easter though! Peeps tweeted out last month that they production is back on! We will see our favorite marshmallow treats with the Easter candy this year!

You won’t have to wait much longer! Keep your PEEPers peeled ??? pic.twitter.com/47TEKALL9Z

They are also bring back two flavors that I never got to try! The Peeps Froot Loops Flavored Pop as well as the Peeps Hot Tamales Fierce Cinnamon Flavored Marshmallow.

Those came out early last year, but due to the production shut down I never got to try them. I’m really looking forward to the Peeps Hot Tamales Fierce Cinnamon Peeps!

Eeek! I can’t wait! What is your favorite Peeps flavor?