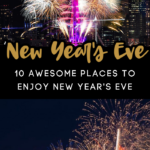 When you think of going somewhere BIG to celebrate New Year’s Eve, you immediately think of Time Square in New York, right?

But, there are so many other cool places to spend your New Year’s Eve — places that may still be crowded, but they aren’t “New York” crowded!!

Check out some of these alternatives to New York on New Year’s Eve. Some of them are places you wouldn’t normally think to go, but they are all awesome destination locations for your New Year’s celebrations!

1. Gatlinburg, Tennessee – This quiet mountain community does it right for New Years!! They have a ball drop on the Gatlinburg Space Needle — which you can see from “the strip” — and then they have spectacular fireworks that light up the mountain night sky.

2. Atlanta, Georgia – Ring in the New Year in southern style! You can choose from a whole slew of different parties — which are held at venues throughout the city. There is certain to be something you like, with “options like elegant masked balls, intimate cocktail soirees, and large celebrations with open bars and DJs.” There are also huge sporting events, and light festivals — including the Chinese Lantern Festival.

3. Flagstaff, Arizona – They do something a little different here. Instead of a ball drop, they drop a pinecone! “Thousands [gather] in the streets for the countdown into the New Year and the lowering of the Pinecone followed by a brief fireworks display.” There’s also skiing, local craft brewers, a stay in the Flagstaff Nordic Village, and you can cruise the famous Route 66!

4. Dallas, Texas – They say everything is bigger in Texas, and that includes the New Year’s celebrations. You can choose from hundreds of parties — everything from elegant to loud and exciting. You can also choose to take in a family event during the day at the Dallas Arboretum. AND, you can’t miss the firework spectacular over Reunion Tower!!

5. Los Angeles, California – This giant New Year’s Eve celebration rivals that of the crowded Time Square experience — but you have SO MANY more choices in LA. You can head to Universal Studios for their firework spectacular, check out one of the MANY parties in the area, and even catch the famous Rose Parade on New Year’s Day! And, let’s not forget that Disneyland and Knott’s Berry Farm are close by, where you get special fireworks, live celebrations, and usually extended hours to enjoy the fun.

6. Washington, D.C. – You probably don’t think of D.C. when you start planning where you will go for New Year’s. Sure, there are tons of parties, and beautiful fireworks displays, but there are also many family events to ring in the New Year.

7. Orlando, Florida – Talk about choices! You have the insane spectacular and fun that can only be found at Disney World. There is Universal Studios, which has “Grinchmas, Christmas at the Wizarding World of Harry Potter, all-new larger-than-life Macy’s balloons and Christmas floats, plus Universal’s new Holiday Character Celebration.” And, of course, there are fireworks. You can head over to SeaWorld for their firework and celebration on New Year’s Eve. There are also tons of parties and celebrations in downtown Orlando, itself!

8. Seattle, Washington – This might be a quiet “little” city near the mountains and the Puget Sound, but they know how to ring in the New Year right. You can hit up one of the MANY parties in town, and you CAN’T MISS the fireworks show at the famous Space Needle!

9. Lake Arrowhead, California — Here, you can hit up Santa’s Village and the gorgeous Lake Arrowhead Resort and Spa at Lake Arrowhead Village. They have a firework spectacular over the lake that you won’t want to miss!

10. Honolulu, Hawaii – Right? Why WOULDN’T you want to ring in the New Year in Hawaii?!? You can take in a traditional luau, like Waikiki Starlight Luau at Hilton Hawaiian Village.  There is also a party at the Ala Moana Boulevard at Aloha Tower Marketplace. And, of course, there are fireworks with that Hawaiian Island backdrop!