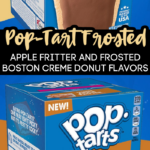 Pop-Tarts felt inspired enough to create not only one new flavor to bite into, but two flavors that are extra sweet for those with a big enough sweet tooth.

Leave it to Kellogg’s to stuff two commonly known sweet treats in a flaky pastry shell with frosting.

The two new flavors are expected to be stocked on store shelves at the end of December, but we’re hoping at least before Christmas.