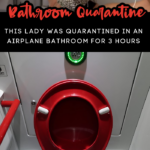 You haven’t experienced panic until you’ve tested positive for COVID in the middle of a flight, and had to quarantine in the bathroom for 3 hours.

That is exactly what happened to Chicago native Marisa Fotieo right before Christmas.

Marisa had done all the things — gotten vaccinated, gotten boostered, took “two PCR tests and about five rapid tests” before her flight — but she still somehow managed to make it on the Icelandic flight with COVID.

The early childhood school teacher was ultimately headed to Switzerland with her family for the holiday, and she’d taken every precaution she knew to take.

There was absolutely no reason to think that she might have contracted COVID — afterall, the tests had all come back negative.

HOWEVER, about an hour and a half after takeoff, she began to experience the twinges of a sore throat.

The warning bells started going off in her brain, and panic started to set in for poor Marisa. She headed to the airline bathroom, and commenced taking a rapid COVID test.

The wheels started turning in my brain and I thought, ‘OK, I’m going to just go take a test.’ It was going to make me feel better. — Immediately, it came back positive.

She knew this was bad. She’d been with her classroom full of children just days before, she’d just had holiday dinner with her family, she’d been sitting in a cramped, full flight — and now she was positive for COVID.

Marisa was in a frantic state of anxiety. She immediately tried to get a hold of someone — anyone — who could assist her with this less-than-ideal situation.

Rocky, who’s real name is Ragnhildur Eiríksdóttir, tried to calm Marisa’s nerves. She did everything she could to try and help under these new scary turn of events.

She tried to adjust the seating arrangements, to give Marisa a seat by herself so she could socially distance as best she could from the rest of the passengers — but the flight was full. They weren’t able to make social distancing possible.

Marisa, not wanting to be around the others on the plane and possibly spread the virus to them, opted to remain in the airplane bathroom.

Nope, not an ideal location to be stuck mid-flight to Iceland, but it was her new home for the remainder of the flight.

Rocky placed a note on the bathroom door that read Out of Service, and Marisa rode out the rest of the flight — about three hours — locked in the bathroom.

The flight attendants tried to make sure she was as comfortable as possible, checking up on her and bringing her drinks, but in the bathroom she stayed.

She could have been ill about the situation, but instead she was relieved that she wasn’t in the main cabin infecting all the other passengers — “one of which was her 70-year-old father.”

Marisa used her time in the bathroom to buy internet access. She contacted her school to immediately let them know the situation, and then she documented her time in bathroom isolation on — none other than — TikTok.

When the plane finally landed in Iceland, Marisa says the airline gave her 2 COVID tests — a PCR test and a rapid test. Of course, they both came back positive.

What a bummer of a situation!

Her family wasn’t exhibiting symptoms, so they were allowed to catch their connecting flight to Switzerland. But, poor Marisa was stuck in Iceland to quarantine all by herself.

She was taken to a local Red Cross hotel, where she was given the star treatment — checked on by doctors three times a day, given meals, given medications, and really treated fantastic by the Icelandic hospitality.

Rocky, the flight attendant from the flight, even checked up on her and sent her over a special care package!

I knew she was going to be by herself in Iceland. — So even if it’s isolated, if you have someone there that can bring you something is nice. So, I just had to be that someone.

According to Marisa, the 10 days of isolation wasn’t really that bad at all. AND she was able to meet back up with her family on their way back through to Chicago. They will get a bit of R&R time in Iceland, until their flight picks back up to the States on January 3rd.