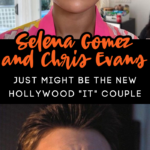 Can I just go on record as saying that Selena Gomez is one of the luckiest women in the U.S.?

She has previously been associated with Justin Bieber, and now she is rumored to be dating Chris Evans. Yowsa!

Okay, so the rumors haven’t been officially confirmed, but I’m just going to go ahead and assume all the talk is 100% true!!

The two may or may not be working on a film together (unconfirmed but definitely spreading like fire around the rumor mill).

They also may or may not follow each other on social media — it has been confirmed that he definitely follows her.

I know, I know. That’s a lot of maybes and what-if’s. Does that really matter in the world of celebrity? If it’s rumored, it’s usually true, is it not?

There is even one Twitter enthusiast that shows photographic “proof” that the pair were leaving the same restaurant earlier this week.

But, before you get TOO excited, it was later established that the picture of Selena was taken in 2017 outside a pilates studio. Boo!!

Then, to make matters worse, the photo of Evans was verified to have been shot in 2013. Dang it!!

There’s been several other fakey-fake photos of the pair leaving places together. None of which have panned out.

So, the rumors actually aren’t substantiated at all — but that doesn’t stop them from being my new favorite Hollywood couple. Can we go ahead and call them “Chrislena”???

I like it see movie Snowpiercer in Totally The Bomb.