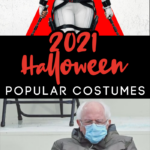 Halloween is right around the corner and I can’t wait!!! Have you figured out your Halloween costume yet?

If you are looking for something very “in” this year, we have GOT you! Last year, we saw all the Tiger King and Harley Quinn costumes. This year, we have a whole line up of the popular choices for costumes!

We all saw it. Bernie Sanders sitting alone, freezing in a stadium with his cute little gloves will be iconic for quite some time. So why not make him your spirit animal for Halloween?

With Bridgerton now being the second most popular show this year, it’s safe to say we will see a lot of costumes inspired by the show, especially couples costumes!

I feel like recreating this look for Halloween will be to mock Kim K, but because of all of the talk of her outfit, it’s safe to say we will see at least a few of these. Not to mention it would be kind of easy to do!

With her solo movie releasing this year, we’re sure to see a LOT of Black Widow costumes. But I’m not even mad about it!

I am DEFINITELY expecting WandaVision costumes and I’m truly excited about it. I was a bit obsessed with the show. If my husband was into couples costumes, we would totally be dressing up as Wanda and Vision.

With her songs going crazy viral this year, we’re sure to see some teens running around with stickers stuck to their face!

With the recent release of this amazing film, we’re sure to see some Cruellas with their Dalmatians! All you need is a wig and some crazy clothing, so another easy one to make!

And last, but obviously not least, we have the most popular show around right now. This is sure to be the biggest costumes around this Halloween, so if you need help finding the pieces for your costumes, check out this post!