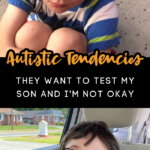 My 10-year-old son has been showing some behaviors that are increasingly troubling, and we have had to put him in counselling to try and combat his rage and obsessive-compulsive tendencies.

Andrew is absolutely the most loving child you will ever meet, giving hugs and cuddles without prompting. He is, by far, the clean-freak in the family, which I thought was a good thing. This child is also smarter than I ever thought a kid could be, and he is FUNNY!! He seems to come at most every situation with a bit of humor.

But when something sets him off, it’s like a demon has taken over. There are tantrums, hitting, throwing things — basically, his goal becomes to destroy anything and everything in his path.

He has also become very obsessive about things. He is CERTAIN we are going to try to feed him expired food, and he will meticulously check the dates on EVERYTHING from milk, to cereal, to bread, to hot dogs. He will even check the dates on boxes of macaroni or cans of vegetables.

There isn’t a meal that goes by when he isn’t inspecting his foods for ANY signs of abnormality. He is terrified that he will eat something that has gone bad or spoiled in some way.

At school, he has started acting out, making noises in class and doing silly things like writing on other kids’ papers.

Now, I have no idea where or why these actions and fears have sprung up, but sprung-up they have.

It has gotten to the point where I know we need more help than myself or my husband are capable of.

To put him in counseling, to me, was like admitting I am a failure as a mother, but I know it was ultimately the best thing.

My brain can tell me all day long that I haven’t really failed my son as a mother. But, in my heart, I constantly wonder if I could have done more.

We set Andrew up with a counselor, and things have been going okay. Not great. Just okay. He doesn’t talk a whole lot, and he actually seems to act out of character — kind of like a toddler — more when he is in front of the counselor.

At his last session, his counselor had me sit in on their time together, and then she had some suggestions.

Maybe I could get him some fidget toys. Maybe I could work with him on deep breathing exercises to combat his social anxiety (which I didn’t even realize he had). Perhaps I should try more positive reinforcements.

Then she said something that I wasn’t expecting at all, and it kind of punched me right in the gut.

She suggested that we get him tested for autism tendencies, OCD, ADHD, and sensory processing disorders.

Isn’t this something that presents in younger kids, I wondered. How could I have gone 10 years without realizing we needed to deal with this?

I know he will always be MY Andrew, even if he tests positive for a disorder. It won’t change who he is.

My gut-reaction is to blame myself, but there really is no blame.

Could I have done things differently in my pregnancy? Did I set improper boundaries with him growing up?

Maybe by getting him tested we will ultimately be able to get to the root of the problem, and get him the help that will actually improve the problems we are seeing.

Getting him tested won’t really change anything. It will just show us how to deal with him.

It’s just a scary thing, and I may need a minute to wrap my head around the whole situation.

What do you think? Have you had to struggle through this same thing?