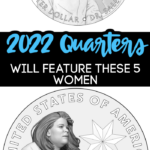 I’ve always been fascinated with the different styles and designs used on the U.S. quarters. So to hear that we have more in store makes me happy!

In 2022, the U.S. quarters will feature 5 pioneering women that have changed the course of history, and they have been officially unveiled!

Anna May Wong was the first Chinese American Hollywood star! She appeared in silent films starting in the 1920s, and continued with films such as Shanghai Express. Unfortunately, racism in the industry limited what she was able to do.

Maya Angelou was a celebrated poet and civil rights activist. She died at the age of 86 and left her artistic work to be celebrated for years to come.

Nina Otero-Warren is known for leading a New Mexico suffrage movement. She also was the first female superintendent in Santa Fe Public Schools.

Sally Ride was the first woman in space! Beyond that, she was a physicist and educator.

Wilma Mankiller was the first woman elected principal chief of the Cherokee Nation and an activist for both Native American and women’s rights.

This is set to be the first installment of “American Women Quarters Program.” These will reveal images of women who represent a wide array of professions from which women were previously shut out.