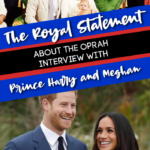 Are you sick of hearing about The Royal Family and their drama yet??

Yeah, me either. I eat this stuff up!!

So, Buckingham Palace has dropped an official response in regards to the allegations that someone in the royal family is a racist.

If you have been vacationing under a rock, and don’t know what I’m talking about, apparently someone in the royal family is a bit of a — uh-hem — racist.

This is just ONE of the bombshells that was dropped during the Oprah Interview with Prince Harry and Meghan.

They told Oprah that someone in the royal family was concerned that Archie would come out too dark.

NOW, apparently the royal family has released their response to those racist allegations, and they are saying the rumor is “concerning.”

“The whole family is saddened to learn the full extent of how challenging the last few years have been for Harry and Meghan.

“The issues raised, particularly that of race, are concerning. While some recollections may vary, they are taken very seriously and will be addressed by the family privately.

“Harry, Meghan and Archie will always be much loved family members.”

So, take it for what you will, that’s how the royal family has responded.

Is it too little too late?

Is it not nearly enough?

Is it sufficient to squelch the public from talking about a private family matter?

I have my own comments, but I’m curious to know what you think.

73 shares
Here's When You Can Expect Your $1,400 Stimulus Check
← Previous
You Can Get A Galaxy Projector To Project A Starry Night On Your Bedroom Ceiling
Next →
Click here to cancel reply.