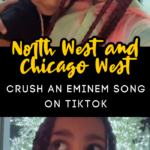 Kanye (Ye) West is known to be hella good at what he does — but his girls might just have gotten their skills from their dad.

North West just uploaded a TikTok video where she raps to The Real Slim Shady by Eminem, and she enlists the help of her 3-year-old sister, Chicago.

The two totally crush the song!

I mean, you can’t really go wrong with such an EPIC song, but I would totally butcher it. LOL!!

Leave it to Kanye’s kids to rap like a pro.

It’s the return of the “ah, wait, no way, you’re kidding
He didn’t just say what I think he did, did he?”
And Dr. Dre said, nothing, you idiots!
Dr. Dre’s dead, he’s locked in my basement (ha ha!)
Feminist women love Eminem
“Chicka, chicka, chicka, Slim Shady, I’m sick of him
Look at him, walkin’ around, grabbin’ his you-know-what
Flippin’ the you-know-who — Yeah

Okay, so Slim Shady isn’t something I’d really let my kids listen to — even at 10 and 13 — but HEY, it’s Kanye and Kim’s kids. They can do what they want. Right?

And, they couldn’t be more cute!!

North West is dressed in a zip-up, tie-dye hoodie, while Chicago is rockin’ it in a black ensemble with a colorful bead necklace.

There is no sign of Kim K, even though this TikTok account is North’s and Kim’s joint TikTok, but she doesn’t need to be included for it to be hella perfect.

Who thinks North and Chicago need to kick it a bit more together on TikTok? *Raises both hands*

You can catch the full video of North and Chicago west laying down the beats HERE.