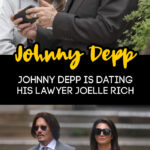 Breaking News: Johnny Depp is confirmed to be dating his lawyer, according to Yahoo.

Hold on. Slow your roll.

It’s not THAT lawyer.

Everyone was hoping that Johnny would get together with his lawyer, Camille Vasquez.

While there were DEFINITELY some sparks there — prove me wrong — the pair, alas, aren’t meant to be (for now, anyway).

BUT, Johnny Depp is dating the lawyer who represented him in his UK libel case, Joelle Rich.

Kinda makes me wish I would have seen THAT trial.

I wonder if the tension was as thick as it was between Johnny and Camille.

A source told US Weekly that the couple are pretty hot together.

Their chemistry is off the charts — It’s serious between them. They are the real deal.

A Source to US Weekly

Now, according to TMZ, Joelle is married. HOWEVER, she is supposedly in the process of getting divorced.

I can’t wait to see how this plays out. I do love that Johnny at least got with ONE of his lawyers. LOL!!