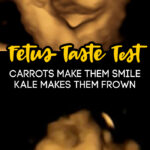 A new study shows that unborn fetuses can distinguish tastes in utero.

We decided to do this study to understand more about fetal abilities to taste and smell in the womb.

This is the very first research that has been done like this while the fetus is in the womb.

There have been other studies done on infants and taste, but they have all been done once the baby is born.

The findings shows that fetuses in the last 3 months of pregnancy are mature enough to distinguish different tastes transferred from the maternal diet.

Researches followed 100 moms-to-be between the ages of 18 and 40. All of them were in their third trimester when the research was done on the unborn fetuses.

In this experiment on the pregnant moms, 35 were given kale capsules to consume, 30 were given carrot capsules, and 35 were in a control group that were given placebo capsules.

Participants were asked not to eat or drink anything for at least an hour before the test — they kind of started with a blank tastebud slate.

After an hour, the moms took one of the capsules containing either vegetables or placebo.

4D scans were done to monitor the reaction to the flavor of the capsules by the fetus.

More times than not, when the fetus “tasted” carrot, they sort of smiled.

When they “tasted” the kale, they made a sad face. Can’t really blame them, right?!?

It is important to note that all the moms-to-be were of white British background.

More testing definitely needs to be done across multicultural lines. It would be very interesting to see how babies react to ethnic foods.

But, for now, carrots are a go, and kale is a no. Much like dinner time with my kids. LOL!!