I’m a product of the 80’s so for my time, Nair was the big thing for hair removal (I’m talking the bikini area). Effective, painless, but like shaving it grew back so fast that I was scratching my girly bits from regrowth a day after I’d done it. That’s always attractive, “No, I don’t have crabs…why do you ask?” Or that lovely chaffing feeling when you’re in bed added to the regrowth on your legs rubbing together like a cricket… you could almost hear the chirping. Not pretty unless you’re practicing your cricket mating call. Which is what led me to the time I found out giving birth is easier than waxing at home… 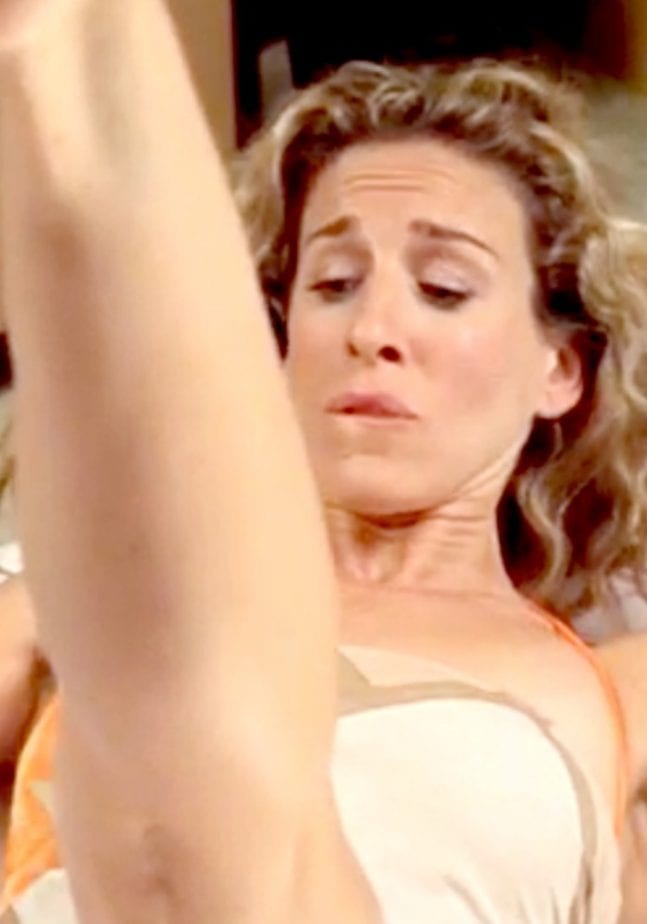 I had been waxing my own eyebrows for quite a few years and thought it was the greatest invention ever, but I didn’t consider it for bikini area until I was 29. Just the thought of laying my girly bits out there in front of a complete stranger had me nervous and a whole lot embarrassed, but I had heard good things: it takes hair longer to grow back and with enough treatments, the hair becomes softer. Sounded great, I mean I was sold on the idea of the procedure but still, I couldn’t get past having someone else do it for me…that’s when  I came up with the BRILLIANT idea to do it myself. How hard could it be?? I had a much bigger area to work with than my eyebrows and I already knew how to achieve the perfect wax temperature, so why not?

I purchased my wax kit and decided that while my 3 year old daughter was taking her bath, this would be the perfect time…I could keep an eye on her and achieve a smooth bikini area at the same time. Two birds with one stone.

I very carefully spread the wax on both sides of my groin area and laid the wax removal paper on the right side, this whole time my daughter is playing with her toy horse in the  bathtub singing away. Things were going smoothly (or at very least soon will be). I remembered from the eyebrows, pull against the growth of hair, quickly and apply pressure immediately. Okay, no sweat. I pulled the skin on my leg taut, got a good grip on the paper and with a quick swift yank, I ripped the wax and paper off.

My daughter, who was small enough in the tub, had to get up on her knees just to see over the edge. As I’m on my knees, half crying and half laughing, I hear this sweet little voice; “You okay, Momma? You okay?” 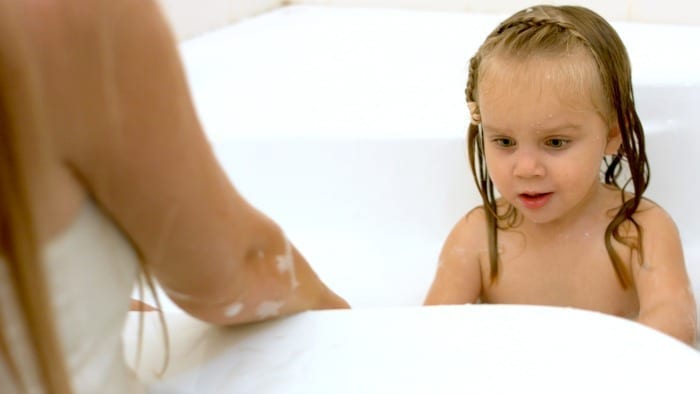 Trying not to scare my poor toddler, while bent over in sheer pain, I look up to see her big blue eyes peeking at me over the edge of the tub with utter concern on her face and I replied in a crackling voice, “Yes, Little Miss… Momma is okay.” She seemed to believe me, thankfully and went back to playing…Whew, good….she’s not traumatized…not like me anyway. My eyes completely teared up, jaws clenched…all the while fearing that I may or may not have skin under the hand that still held pressure on half of my lady parts.

As I removed my hand to find that the hair indeed was gone and the skin remained, I realized….at that very second….”Oh crap, I have to do the other side, because my dumb-ass put the wax on both sides…..*My head dropped at the realization of my stupidity*

What-the-hell was I thinking?

At that moment I regretted every decision I had ever made. I clearly had not researched this enough and I really thought that this particular part of the body could take more. Seriously. So what choice did I have? I had aready put the paper on the other side, it was all ready to go, but I wasn’t… then began my 30 minute personal monologue. It took me 30 freaking minutes to talk myself into the courage to do the other side.

“You have no choice, the wax is there. It’s ready to go.”

“Maybe I can get it off with hot water? No. That’s dumb.”

“You know there is only one effective way of getting this off. Maybe there’s another way? Oil? I don’t have any… care. Who doesn’t have oil? Even baby oil? Nope. Cooking oil? Nope….You’re SOL.”

“This is going to hurt like a mother. Yep, you’re right there!”

“You’ve given birth you can do this. Birth did not hurt this bad.”

“Just freaking do it for Pete’s sake. Get it over with.” 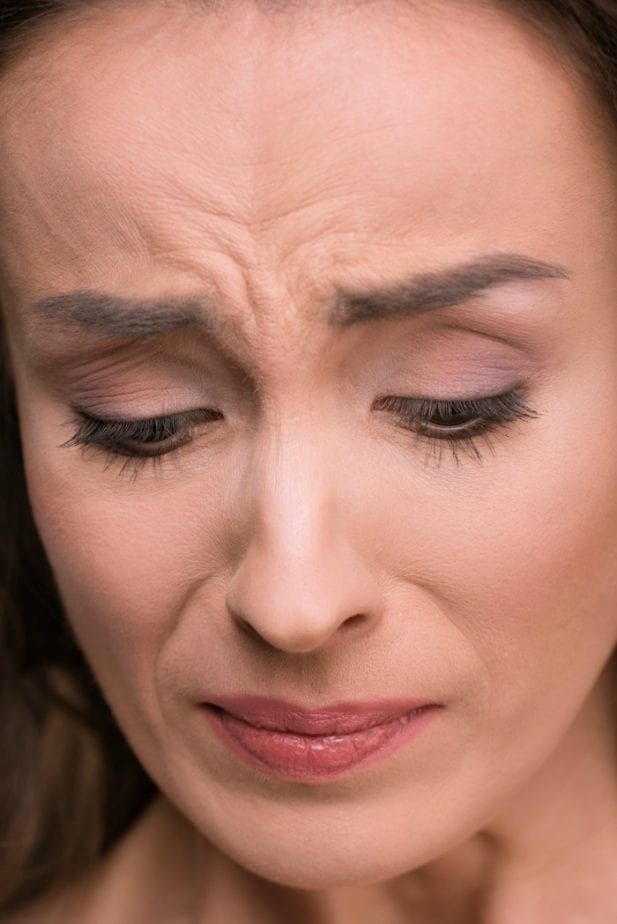 My daughter still singing in the tub beginning to turn into a raisin, stopped singing and asked “Momma, whatcha sayin’?”

“Oh, nothing baby-girl, Momma’s just talking to herself” and back to playing she went….

Now, down to business. “Just. Do. It. Focus…..Breathe…..” I took a couple Lamaze breaths and just went for it…ripped it off like a band-aid. Again…I dropped to my knees. This time only moaning loudly in pain no screaming, trying even harder to not terrify or concern my child.

But the girl didn’t miss a beat, eyes peeking over the tub with a look of confusion she asks me, “Momma, it happened again?”

I had no good answer, the only thing I could say was, “Yes, but believe me, Little Miss… It will NEVER happen again. NEVER, EVER, AGAIN.” She just smiled, completely happy with that answer and completely clueless as to what had occurred. She was just ready to get out of the tub….as soon as I could move. “Just give Momma a minute.”

To this day…Nair it is for me.  For those of you brave women who do it yourself or even have it professionally done..I bow down to you. 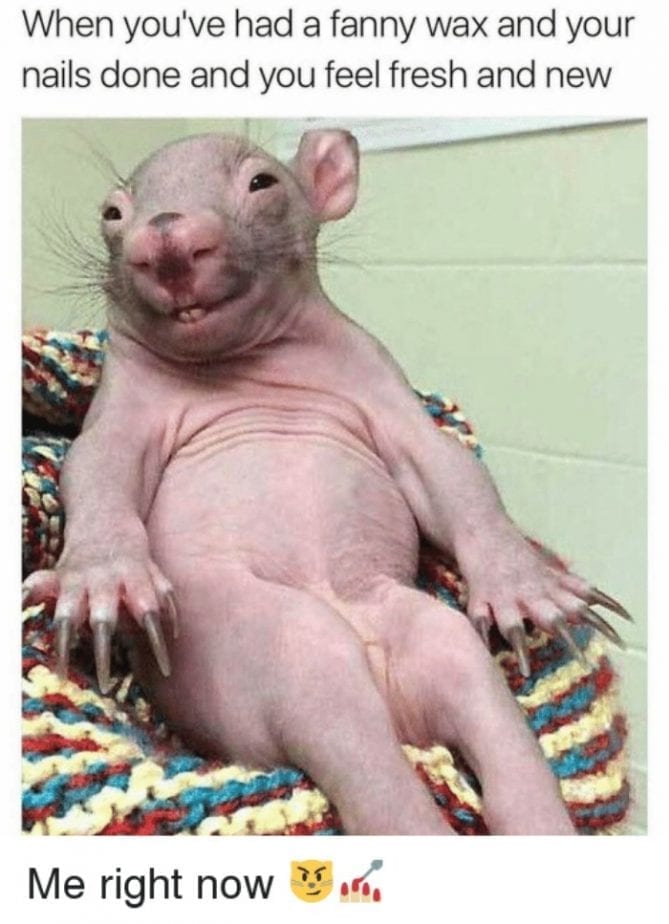 What an awesome article, we're still laughing and crying !!!!! So proud of you, you truly have a gift!