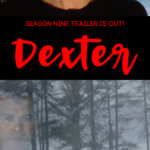 I am a super fan of the show Dexter, I can’t even tell you how many times I have watched the entire series.

The ending seriously hurt my heart, it wasn’t the ending that I wanted at all.

I wanted Dexter to be with Hannah McKay and his son Harrison soooo bad!

Well, after watching it over and over I finally accepted the ending, it got a little easier to deal with each time.

Then, when I heard that they were going to give us another season of Dexter to make things right, OH MY GOSH I had a fit!

Ever since they announced season 9 of Dexter I have been watching the internet for any bit of news about the new season.

Season 9 of Dexter is set to debut sometime this fall for a 10-episode event.

I am super excited that Clyde Phillips is on board because the first seasons of Dexter were his babies and I want that same energy in season 9.

I was super disappointed to see that Michael C. Hall was the only returning character, I really wanted it to include reuniting with Hannah and Harrison.

Dexter’s gonna do what Dexter does best…

You see a snowy scene outside of a window.

As the camera zooms out, you then see Dexter’s reflection standing at the window and you also see Dexter’s victim tied up and struggling to get free.

The teaser ends with a smiling Dexter happy to be doing what Dexter does best! Man, I am SO excited!

He’s just a soul whose intentions are good.

See what #Dexter has been up to when he comes home to SHOWTIME this Fall. pic.twitter.com/Bh8UC83qn0