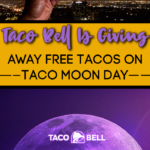 The moon is said to control the earth’s tides, mood swings and even Taco Bell cravings?

On May 4th, the bright big object in the sky will resemble a sacred item, the crunchy taco at Taco Bell.

Thanks to the moon’s shape, Taco Bell will be giving out free crunchy tacos for the first ever “Taco Moon” from 8pm to 11:59pm local time in-store or through Taco Bell’s app.

Not only does the popular fast food chain want fans to look up the sky, but Taco Bell is also promoting the new lunar phase in celebration of the major international expansion of Taco Bell restaurants.

Currently, the home of the crunchy taco is now in 32 markets with over 7,000 restaurants worldwide and a “take over the world” plan to have 10,000 restaurants in the next decade.

Free tacos during the Taco Moon lookalike is only the first debut for Taco Bell’s newest campaign, “I See A Taco” which will begin in the next few months.

We aren’t exactly sure what the new campaign will include since Taco Bell has yet to release more information, but all fingers crossed that more free tacos are coming our way!

The Taco Moon is the only sign you need to drive on over to Taco Bell and claim your free crunchy Taco Bell, and let us know if you feel any sudden crunchy cravings!

1 shares
People Are Making Floating Candles Out Of Pool Noodles To Put In Their Pool
← Previous
The First Trailer For Dexter Season 9 Is Here And I Am So Excited!
Next →
Click here to cancel reply.