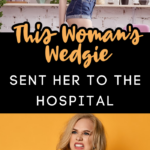 We’ve all had them — the annoying wedgie that happens under our clothes — inevitably in public — when we have to try to discreetly dig at our backsides to release the panties that have slipped into places they shouldn’t be.

But, we’ve never had to deal with the 8-hour uncomfortable situation in which this lady found herself.

I’ll be honest, I’m pretty sure there is no way I could have gone 8-hours with underwear stuck in my butt crack. People will go to great lengths for the sake of fashion — but I’m just not one of those people. I’m just not that strong.

This lady, known as Sam, took to TikTok (of course) to tell the tale of what happened when she made the choice to ignore that annoying wedge in her bootocomous — and she is warning people not to do the same.

Sam’s choice of shorts, combined with some drifting underwear, caused her to wind up IN THE HOSPITAL, and here’s her story.

Poor Sam was on an all-day date, and had chosen to wear some super cute tight jean shorts. The lengths we’ll go to for a cute butt, AMIRITE?!?

At some point during the day, she developed an uncomfortable wedgie, but she didn’t think much of it (maybe she just tried to ignore it).

It wasn’t until the next day, when she woke up with a sore bum, that she began to regret her decision to let her underwear bunch in her backside all day long.

See, her bum wasn’t just sore. Have you ever had that uncomfortable day-after chafing that goes along with wearing a particular piece of clothing? This is what she was experiencing — times a thousand.

That night, I noticed that I had a large bump where the chafing had occurred, and as time went on, it started becoming more painful. The pain was isolated to one spot and it felt like a throbbing, stabbing pain

This particular chafing lasted days — and as the days went on, she began to feel more and more uncomfortable, and it actually began to make her feel sick.

She wound up at her doctor for the situation, and he had to give her an antibiotic, because she had actually developed a bit of an infection — cellulitis. How freaking embarrassing, right?

Things went from bad to worse, and Sam had to have her mom take her to the hospital. She actually wound up in the ICU!! All because of a wedgie!

I was shivering, very breathless, could not walk and had extreme body aches,” Sam said. “They admitted me to the ICU, and that’s when I realized this was a bit more serious than I had anticipated.

The thing about cellulitis, if left unchecked, it can turn into deadly sepsis really quickly.

In Sam’s case, her cellulitis actually turned into septic shock — a dramatic drop in blood pressure that can lead to severe organ problems and death.

Y’all. The doctors were even considering surgery to remove the infected skin around her butt! That is one giant case of chafing!!

LUCKILY, after 4 days of antibiotics in the ICU, Sam was able to fight off the infection without a surgical procedure.

I’m happy I made the TikTok, and although it’s extremely scary to have one of the most embarrassing things that has ever happened to me on the internet, it reminds people that we’re all human and experience weird stuff, and it’s nothing to be ashamed of

Now, Sam’s TikTok account has since been set to private, so you can’t go and see the video for yourself. BOO!!

But, make this your giant warning — pick your wedgies if you have to!!