I’m Team Nick And I Hate Myself For It 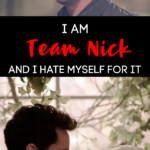 I’m Team Nick all the way — and I hate myself for it right now.

Did y’all get caught up on the first three episodes of The Handmaid’s Tale?

I might have sat my butt in front of my TV for three straight hours, and binge watched the entire thing.

You know you did too — don’t even try to lie and say you didn’t. LOL!!

So, June lived through the whole gunshot wound that happened at the end of last season — duh, you knew she would.

The fugitive handmaids went to a safe house farm to work, where June was captured.

Let’s get to the good part — NICK.

What in the world is going on with Nick?

He’s a bad guy, but he really isn’t, but he actually is?

He saved the Commander’s life by bringing him back into the fold of Gilead.

But, he also supposedly saved June’s life — by getting her arrested and taken in?

I got the impression that he had something to do with the whole Hannah incident, but I wasn’t really clear on that.

BUT, after all that, I still love him — even if he is currently on the wrong team.

I am rooting for him, all the way.

I think deep down somewhere, underneath his new harsh exterior, is the person who made a baby with June.

He is still the person who got her to that safe warehouse for months.

Sure, he might have gone off the rails, and joined the bad guys, but he’s still Nick, AMIRITE?!?

I was so confused by the couple of encounters that Nick and June had during these first three episodes of the season.

I couldn’t tell if he was really bad, or if he was actually trying to help June.

I couldn’t tell if he still had feelings for her, or if he was “playing” her.

But then, there was that whole scene with the kiss and the “I love yous.”

So see, Nick is still in there somewhere.

I will remain Team Nick until the very end.

I mean, June still loves him, so that’s good enough for me.

It ain’t over ’til it’s over, and he still remains Nick.

1 shares
The First Trailer For Dexter Season 9 Is Here And I Am So Excited!
← Previous
You'll Be Able To See The Taco Moon In May. Here's How!
Next →
Click here to cancel reply.