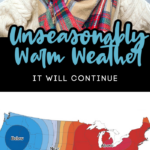 Hold on to your Holiday Hats all you fall lovers, because the warm temps are back, and they don’t show signs of backing down anytime soon.

If you look at your 10-day forecast, you will see that it is mostly calling for above-normal temperatures, and I can’t tell you how distraught this makes me!

They are calling for high temperatures nearly 30 degrees above normal at times in certain areas. UGH!! Come on!!

The core of the anomalous warmth is predicted to focus in the north-central United States, but above normal temperatures are anticipated to prevail in most places east of the Rockies.

Fall had JUST started, and it looked like the weather was going to comply with cooler weather, but it looks like Mother Nature has other plans up her sleeve, and this is one surprise I am NOT happy about.

I don’t know about y’all, but I had JUST pulled my cool-weather clothes out of storage, and went and bought my puppers a fun Cooler Weather Scarf!

As if this news wasn’t bad enough, this unseasonably warm weather just may trigger heavy rainfall (which we are seeing today where I live) and severe storms in the central and southeast United States.

We may even see some new tropical storm activity in the Gulf of Mexico. And, we thought we had gotten away with a rather light hurricane season!! It ain’t over ’till it’s over, folks. *Sigh*

The poor northern plains man, they are baking. Montana even saw highs of 90 degrees this week, which is basically unheard of. They were hotter than Texas, if you can believe it.

This latest bout of heat follows an even more intense round last week when it hit 100 degrees in Hazen, N.D., the highest temperature ever recorded so far north so late in the calendar year.

I don’t know how it was for you, but we didn’t get a LICK of snow last year, and I was hoping to break that disappointing weather standoff this year. It may not happen. *Sad Emoji*

You know what else this nasty warm air is affecting? The fall foliage!! It’s almost non-existent so far this year, which has me in a seasonal funk of great magnitude. There are pumpkins everywhere, but it still feels like September.

So, when will we get a reprieve from this hot weather? I can’t even tell you. Stay tuned for further news.