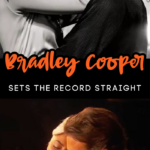 Bradley Cooper is finally opening up about that super steamy Oscars performance between him and Lady Gaga, and some of you are about to be totally devastated.

Tons of people were speculating that the love between Bradley and Gaga was legit beyond the movie screen.

I can totally see why. I mean, the performance was pretty hot.

After seeing the movie, and then seeing their duet on the Oscars stage, I was kinda rooting for them to be together. I knew it probably wasn’t going to happen in a million years, but the romantic in me was as hopeful as the next person.

Well, Bradley has officially set the record straight, and a real-life steamy hot relationship between the pair is not meant to be.

He said the entire thing was, in fact, acting — which they do really well!

See, Bradley had a bit of stage fright, which is to completely be expected. He was singing LIVE at the Oscars, afterall — not something he’s used to doing.

He planned to treat the entire thing like he was acting for a movie, that way he hoped he wouldn’t be so nervous.

Just from a personal standpoint, it reduces the anxiety level. They kind of fall in love in that scene in the film. It’s that explosive moment that happens to happen to them on a stage in front of thousands of people. … It would have been so weird if we were both on stools facing the audience.

So, it was all an act. Cue the tears from thousands of fans.

Bradley has nothing but love for Gaga as a performer and actor — platonic love, like one would have with a good friend.

In case you forgot, Bradley was not only the actor on A Star Is Born, but he was also the director. He had to work with Gaga in completely different capacities, and he said she handled it like a champ.

A Star Is Born is such a specific thing, and there was always a meta element to the project. She’s just so terribly charismatic and beautiful. When I met her, I thought, ‘If I can just harness that … then it’s just for me to mess up.’ But then, when we started working together, I realized, ‘Oh, oh, the sky’s the limit in terms of what she’s able to do and her commitment level.

Now, Gaga has already gone on record as saying there wasn’t a relationship there, but I don’t think people were willing to take her at her word.

Quite frankly, I think the press is very silly. I mean, we made a love story. For me, as a performer and as an actress, of course we wanted people to believe that we were in love.

But now that we have it confirmed from BOTH sources, I guess it can’t be denied.

The pair are hella good at their job, and that’s what we got to witness when they sang their HOT duet at the Oscars.

In case you want to relive the performance, we have it for you below.