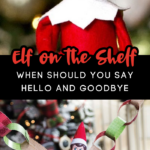 Love it or hate it, if this is one of your yearly holiday traditions, the time is almost amongst us — bringing out that visitor from the North — the WAY North — the Elf on the Shelf.

But, when do you actually bring him out?

I mean, does he (or she in some cases) show up when you put up the Christmas tree? Does he come out December 1st? Does he come to visit some random time in December?

Would you believe that SOME families even bring him out for Halloween? That’s a whole lot of moving that little guy around. Yikes!!

When does the Elf on the Shelf arrive?

Did you know there is an OFFICIAL Scout Return Week? It’s November 24th through December 1st.

At the end of November, the first group of Santa’s Scout Elves departs the North Pole to make their way to homes around the world for #ScoutElfReturnWeek! This weeklong celebration (Nov. 24–Dec. 1) is when most families welcome back their elves, or adopt a new North Pole helper.

Elf on the Shelf Return Week

One fun new tradition to add to this year might be to expect the little dude by December 1st — maybe build up the anticipation. But, when he doesn’t arrive (*wink wink*) “on time,” have your kids write a letter to Santa checking on your elf.

Maybe Santa could write a magical letter to your child, apologizing for the elf’s antics, and sending him on his way to your house.

Quite possibly, Elfy deserves a “time-out” when he gets to town!! (Hey, it would give you an additional week of not having to move him around. Ha!)

It is important to note: Don’t feel like a failure if you don’t put your elf out during the Official Scout Return Week. This is merely a suggestion, but when you put him out is up to YOU!!

When does your Elf on the Shelf return to the North Pole?

The question on every parent’s mind (who is sick and tired of finding new and fun situations for this little nuisance) is — WHEN DOES HE LEAVE?!?

Traditionally, he will “hitch a ride” with Santa on his sleigh on the night of Christmas Eve.

It’s his job to help Santa put the gifts under the tree, and then he will be nice and ready to report back to the North Pole — until next year.

Sometimes parents choose to leave a “special gift” from their elf to that kid who has been exceptionally good for the entirety of Elfy’s stay.