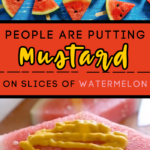 The latest food trend to go viral on TikTok is a staple in many summer diets paired, with an unusual condiment that is usually seen at a backyard BBQ.

Considering that the hottest new food trend to hit social media is currently yellow mustard on cut up watermelon slices, I think it’s safe to say we have all officially lost our minds on this one.

According to @yayayayummy who promoted the pairing of foods with over one million views, 135 thousand likes and several comments that were concerned for the TikToker, the video has stirred up a bit of controversy.

While a handful of users commented that they were down to try the unusual pairing of foods, several other comments expressed the revolting taste, and one user even contemplated deleting his TikTok account after viewing the video.

Even Lizzo, the famous singer went ahead and duetted the video with an opening line of “Welcome to is it bussin’ or is it disgusting?” she said in the clip.

@yayayayummy specifically said that if you do try the tangy trend, using French’s yellow mustard is the key to the combo and with that being said, Lizzo instead used a Heinz yellow mustard, took a few bites and expressed her confusion on the taste.

From what it looks like, the celebrity seemed to enjoy the new combo even without an official verdict, but from the looks of the yellow condiment drizzled on top of fresh watermelon, I’m not quite sure if I can stomach my own review.