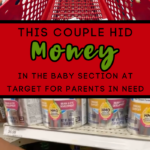 Your daily visit to Target might include shopping for baby clothes, cleaning supplies or other various items depending on the person, but what you wouldn’t expect is hidden money in diapers or baby formula now would you.

This couple has decided to lend a helping hand for other parents who might be struggling to make ends meet with a very simple gesture, hiding dollar bills at a popular retail chain.

Krystal Duhaney and her husband hid a grand in cash inside baby products at various Target stores in Southern California and according to ABC affiliate KABC, Duhaney decided she wanted to help others after making it through her own struggles as a new parent.

“We really wanted to make things a little easier,” Duhaney told KABC. “Hopefully brighten their day and hopefully inspire others to kind of, you know, spread joy and kindness.”

Duhaney, now the founder of Milky Mama, an organization assisting mothers with breastfeeding, shared her adventure to Target via social media videoing the spots where they slipped in folded up money in the baby section.

Duhaney’s post has since gone viral with over 95 thousand likes and oodles of comments from people who were happy to view the random act of kindness.

The mom and dad of two even made sure to inform their followers that she and her husband were careful to place the cash in a way that did not tamper with any of the products the money was placed in.

“Diaper containers are sealed. The diapers are wrapped inside the box as well as formula,” Duhaney told KABC. “It’s not like we’re putting it in the powder. There’s a cover. So, we were very, you know, intentional and we were making sure that we paid close attention to those types of things as well, to make sure that we weren’t actually contaminating anything.”

While their gesture was praised on social media, Krystal told KABC she hopes their gesture will inspire others including their children to be kind and to lend a helping hand where it’s needed.