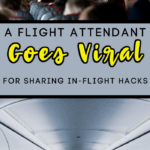 They say flight attendants know all of the ins and outs on an airplane and it looks like that rumor is coming true considering this TikTok user shared a handful of airplane hacks no one ever knew about.

Kat Kamalani, a flight attendant who has gone viral on TikTok for sharing in-flight hacks starts off her viral video shared via TikTok exposing the secret for the aisle seat arm rest.

If you’re having trouble lifting the armrest, there’s a button tucked away underneath that allows the armrest to lift up when the individual sitting next to you needs to visit the bathroom.

Speaking of airplane bathrooms, Kamalani was honest about airplane toilet paper and said exactly what every person who has sat on a plane has thought in the moment of doing their business.

The toilet paper stinks; which is why this flight attendant recommends using the tissues provided above instead!

For those who are riding on an airplane without a monitor system, command strips will do the trick to make your own entertainment system; simply store a command hook in your carry-on bag, hang the iPad, stick the command hook on the back of the seat in front of you to watch your own shows or movies!

While many TikTok users thanked Kamalani for in-flight hacks, several other commenters expressed their concerns specifically over using tissues versus the thin toilet paper when going to the bathroom on an airplane.

“You shouldn’t be putting those tissues in the [toilet] they can easily get stuck,” one said.

“The toilet paper is like that for a reason,” another wrote. “Do not stuff up the line with tissues!”

While Kamalani’s airplane bathroom hack has stirred a bit of controversy, her video has managed to reach over 18 thousand likes with what looks like the majority of TikTokers appreciating her airplane hacks!