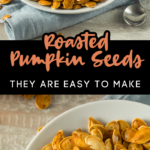 Next time you gut a pumpkin, make sure you save the pumpkin seeds so you can make this super easy 3-Ingredient Roasted Pumpkin Seeds Recipe!

We make this recipe every year and we’ve done this since before you could run out to the store and buy a bag of them.

Somehow, they’re just better if you roast them yourself. They have that perfectly roasted flavor that is so fresh and tasty.

I also sort of take for granted the fact that I know how to roast pumpkin seeds. It’s hella easy, and I thought everyone knew how to do it.

I had a little chat with a friend the other day, and she mentioned she had never tried to roast pumpkin seeds. My mind was blown!! That just won’t do!!

How To Roast Fresh Pumpkin Seeds

First you start with a pumpkin.

The easiest way to do this, without wasting a single thing, is to get the pumpkin for your Jack O’ Lantern.

When you scoop out its guts, save the pumpkin seeds in a colander (strainer). They will feel disgusting — mushy and stringy — but don’t let that deter you.

Do what you’re gonna do with the pumpkin, throw out the gooey guts, but keep those seeds to the side.

Once you have your amazing Jack O’ Lantern all carved and done, you can focus on the seeds that were inside.

Take the colander full of seeds, and run it under cold water. Get in there with your fingers and loosen up the pumpkin guts. You want mostly seed when you’re done.

Preheat your oven to 350 degrees fahrenheit.

Dump your seeds into a deep prep bowl (or just a regular bowl, if that’s all you have). Pour in some melted butter (half a stick will do), and sprinkle in a good amount of salt (like, maybe 1/2 tablespoon).

Stir them up, toss them, do whatever it takes to coat them in the butter and salt mixture.

Now, get a baking sheet, and spread the seeds out in a single layer, and then stick the sheet in the oven.

You want to cook them for about 10 minutes, and then take them out and flip them around.

Put them back in the oven, and cook an additional 7 to 10 minutes. You are looking for them JUST to get golden brown.

Take them out of the oven, and let them sit for about 10 to 20 minutes. They will crisp up even more while they cool, and they should end up crispy and delicious.

Once they are cool, you can put them in an airtight container. Or, you just may end up eating them all before they make it to the container. LOL!!

Try it out, and let me know what you think!