The morning I lost my baby was a completely normal, boring morning. I got ready for work, made it there with at least five or ten minutes to spare, joked with my boss about a card she found, sat down and did my thing. I write all this because it was such a completely and totally innocuous morning. No pain, no cramping, nothing wrong. When I saw the blood in the toilet, my boss took me to the hospital as a precaution, not because either of us thought anything was truly wrong. I was eleven weeks pregnant, after all, and chances were likely this was the spotting that so many newly pregnant women experience. It wasn’t. Though I’d never had reason to think about it before, within less than 24-hours I knew there were at least 5 Things NOT To Say To Someone Who Had A Miscarriage. 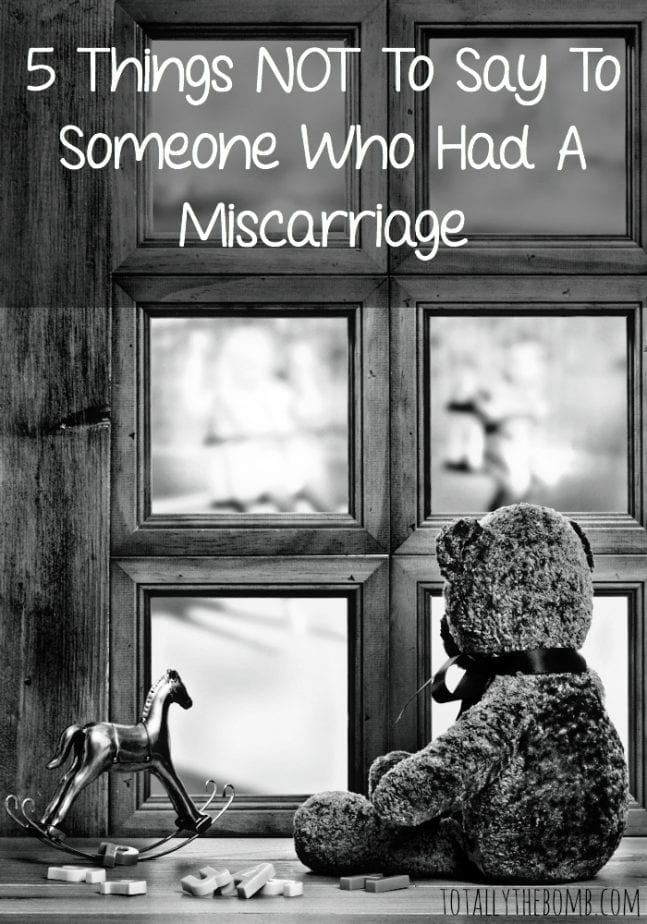 I want to start by disclosing that it’s been Years for me since I lost my baby, but somehow it still hurts. Last week I found out a friend of mine lost hers and I knew it was time to write this post. So whether you’ve been through it or are reading to better know how to support your friends, know that my heart is with you. I truly have been there, and I am very sorry for your loss.

5 Things NOT To Say To Someone Who Had A Miscarriage

Instead…ask your loved one about the child they were carrying. Maybe they didn’t think much about it yet, or maybe…like me…they want people to know how amazing their child would have been.

That does not help even a little bit. All that does is offer in questions of fate and religion and the great beyond. All I wanted was a chance to curl my arms around the beautiful orange teddy bear I bought for Emma and cry about all the things I wouldn’t ever be able to say to her. Thinking about universal truths or a grand plan only made me feel bitter and angry about the baby I never got to hold. The truth was, I needed to go through the five stages of grief, and telling me it wasn’t my time was like skipping four of them and going straight to the pretty end.

Instead…be present with your loved one with whatever stage of grief they are in. If they are angry, be angry. If they are bargaining, listen to it. Eventually they will reach a state of acceptance and they will be so thankful that you helped them through those stages.

This is another one that hurt like hell. You would never tell a grieving parent who lost a breathing child that it wasn’t meant to be. Nooooo. Telling a woman who miscarried a baby that that baby wasn’t meant to be takes away every single dream, hope, plan, and even that little bit of time she actually had with that child. This isn’t a debate about the moment of humanhood or anything like that…if a woman miscarries a child and is upset about it then in her mind that child already WAS. No wasn’t meant to be about it because that child was fully alive in her mind.

Instead…keep it simple. I’m sorry for your loss. That really is enough. 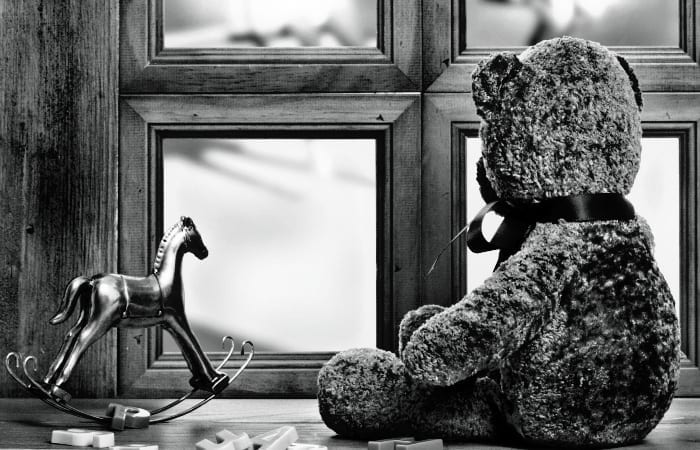 4. So are you going to keep trying?

This one hurts my teeth. Losing a baby isn’t like getting a bad score on the LSAT. Before ever even beginning to think about trying again or future pregnancies or adoption or anything else, women who have miscarried have to make it through the loss of this child. This one. My Emma was my world though I never met her and I would have laid down my life in exchange for hers. Keep trying? Not an appropriate question.

Instead…ask your friend or loved one if there is anything they want to do in memory of the baby they lost. Let them lead the discussion.

Even the most well meaning friends asked me when I’d go back to work. I was lucky, my boss told me to take all the time I need, but because miscarriage isn’t an illness some people forget that grieving takes time. My child was a part of me from the moment those lines turned blue; her death felt like a part of me died.

Instead…ask your friend or loved one if they’ll need any financial help while they are grieving. Are there any bills that need to be paid, or phone calls that need to be made. What can you do to make this time of grieving less hard for them?

When anyone loses a child I think we all struggle with what to say to them. We want to be supportive, but not pry. Loving, but not smothering. The biggest thing to remember about anyone who has a miscarriage is that they did indeed lose a child. Love them. Listen to them. Give them your support. If you’re able to do those three things you will make it easier for them to grieve. And if you can’t figure out what to say, then don’t say anything. Sit with them. Hold their hand, if they’ll let you. Hug them when they ask. Being there for someone who has miscarried will mean more to them then words could ever express. 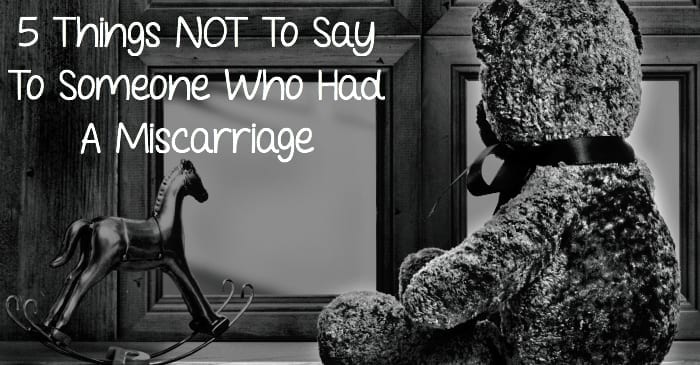 Don't forget the intentionally malicious ones saying "it wasn't even a baby to begin with".

It's just as bad as some insensitive prick telling a woman who'd recently suffered miscarriage to just "shut up already about their miscarriage and get over it!" - seriously?! How hard can it be to understand that people grieve in different ways and at their own pace too!

I experienced a miscarriage in April.. We wanted family to come to a memorial service we were going to hold for our angel. My husband's brother was not sure if he could make it because that was during his 1 year old's nap time. Could they have found a sitter? I guess I would make sure if a relative had a miscarriage, I would totally want to be there.. Not to mention, when he called by husband after our miscarriage, his first question was: How far along was your wife? And he believed that it "wasn't meant to be". So then a few months later, my husbands brother and sister in law get pregnant, and she came up to me and said she wanted me to know they were having a baby, but they don't want anyone knowing yet "in case something happened" they didn't want to go back and tell people.Oh, don't you remember that just happened to us? How cruel can people be.. Those things= NOT TO SAY to someone that experienced a miscarriage. I can say that although those things hurt, I walk in freedom that they are people I can "shake the dust" with in my life. I learned who my real friends/family and people I can trust my heart with through this experience, and people that are no longer allowed in my bubble, I will forgive/love, but I do not have to trust with my heart.

Hi there,I check your blogs named "5 Things NOT To Say To Someone Who Had A Miscarriage" like every week.Your humoristic style is witty, keep doing what you're doing! And you can look our website about love spell.

I would like to add a couple more things that you should never say. And yes, these were said to me multiple times after each of my four miscarriages:

1. You're young, you can have more.-- Um, not necessarily. You never know what medical conditions people are dealing with. 2. There must have been something wrong with the fetus--.This is NEVER okay to say. 3. It's not like it was real yet.-- Excuse me, but for me it was very real.

Most people need to realize that those of us that have had the unfortunate experience, what we really need is just for someone to let us cry on their shoulder. And a big hug letting us know that they are there for us. We don't need words to be comforted. Well, not all the time anyway.

One of my friends tried to compare my miscarriage to get abortion and tried to tell me she knew how I felt. I was livid and disgusted.