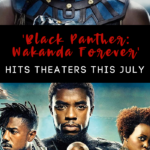 Giddy — That is the ONLY way to describe my state after finding out that we are FINALLY getting word about the sequel to Black Panther.

Black Panther: Wakanda Forever is official in the works, and I need to know more!!

First of all — the elephant in the room, if you will — is somebody going to take on the role that Chadwick Boseman made famous as King T’Challa, the Black Panther?

The answer to that question is NO!!

(Disney) plans on respecting the memory of the late Chadwick Boseman by not recasting his character for the upcoming Black Panther sequel.

THANK GOODNESS, because there could never be another King T’Challa.

Since the role of ‘Black Panther’ can be taken on by anyone who is deemed the protector of Wakanda, they should have no trouble working a new Black Panther into the storyline.

BUT, we don’t yet know who that person might be.

I’d love to hear your speculations and theories!

The cast and crew of the new film are being all hush-hush about what this sequel is going to be about.

Martin Freeman, who reprises his role as CIA agent Everett K. Ross, is the only one talking, and here is what he has to say.

It’s a doozy — (Ryan) Coogler revealed the plot to him over a Zoom call.

Now, Coogler has signed on to write and direct this second trip to Wakanda, so he is really the ONLY one who completely knows what we are going to experience.

And, he ain’t talking. LOL!

I mean, we’ve not done it yet, who knows, we might make it awful, but I’m hoping we won’t — I hope people will be in for a treat.

If you are a fan of the Black Panther comics, you know that Shuri (King T’Challa’s sister) takes over the reigns after her brother, so who knows, she just might be at the forefront of this new film!

We do know that there are several people that have signed on, and WILL be back for Black Panther: Wakanda Forever.

Lupita Nyong’o, who plays Nakia, Winston Duke, who plays M’Baku, Danai Gurira, who plays Okoye, Angela Bassett, who plays Ramonda, and Letitia Wright, of course as Shuri, are all signed on to return to Wakanda in this second film.

The villain, Erik Killmonger, played by Michael B. Jordan, supposedly died in the first Black Panther, but I don’t know that I’d rule him out in the sequel — we’ll have to see.

Only if it’s the right thing and it’s impactful and if I could add something to it. If it means something then, yeah, I wanna be a part of that journey.

I can’t wait to see what other Marvel universe characters, if any, make their way into the storyline.

My nerd, superhero-loving husband is bursting at the seams waiting for this film to come out!!

But, he doesn’t have to wait much longer!

Black Panther: Wakanda Forever is set to premiere in theaters on July 8, 2022 — and if I were a betting person, I’d say to watch for it on Disney+ with Premier Access.

I’ll just be over here, rather impatiently waiting, for July 8th — can I just go ahead and buy my theater tickets NOW?