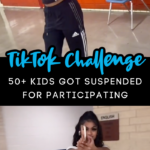 Kids and TikTok. They’re at it again.

50+ Students were suspended in Illinois and Tennessee for participating in the “Who Want Smoke” challenge on the social media giant.

When will society learn that they don’t have to (and many times probably shouldn’t) take part in every TikTok challenge that goes viral?

I mean, it started with Tide Pods. We have seen fire challenges, Benadryl challenges, and even the Devious Licks challenge. Spoiler alert, none of them ended well for the people involved.

Now, kids are taking part in this challenge set to the Nardo Wick song Who Want Smoke.

Well, it involves a video of people holding up their phone, as if it were a weapon, and simulating gun violence. It is set to the song Who Want Smoke, by Nardo Wick.

Why were the kids suspended?

It wasn’t because they were listening to a Nardo Wick song. Kids are going to do what kids do.

At Tinley Park High School outside of Chicago, kids tricked teachers — and even the principal — into participating in the video. They were told it was a video about school spirit.

From what we understand, they were told that they were going to be in a video kind of promoting school spirit. They had no clue that they would be made to look like they were holding guns.

When the video was posted, outrage was sparked that teachers would be involved in such a heinous video.

They had no clue that their phone was going to be used like that. The video is edited pretty heavily to make them look a specific way. So completely misled by a student at the school.

At West Creek High in Clarksville, Tennessee, the school district is saying that the kids involved broke the school code of conduct — under ‘Other Conduct Warranting Discipline.’

This includes ‘any conduct which is disruptive, dangerous, harmful to the student or others, not otherwise specifically enumerated herein,’

Christian Williams, who enlisted the help of dozens of his schoolmates, thought he was just making a video that would go viral on TikTok.

Well, it DID indeed go viral — racking up half a million views — but everyone who appeared in the video got suspended.

The day after he posted the video, he was called into the principal’s office and informed that a parent had complained about the video, which was against the student code of conduct.

So, let this be (ANOTHER) lesson. You don’t have to mimic every single thing you see on TikTok.

And, for the love of Pete, don’t do it somewhere that might get you in big trouble (i.e. on school grounds or at a place of business). Use the common sense your momma gave you.