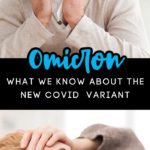 What is it? It’s the newest coronavirus variant that we are trying like hell to avoid.

Right now, it is sitting in southern Africa, but the U.S. is enforcing travel bans out of an “abundance of caution” to try and stop the spread to all our citizens.

It’s not the first variant since the delta variant hit the world, but it is the first new variant to cause “great concern.”

The World Health Organization has named this sneaky little devil the omicron variant — but the technical term is strain B.1.1.529. (Omicron is MUCH easier to remember, AMIRITE?!??)

As of now, there are no known cases of omicron in the United States, but that doesn’t mean it can’t show up here.

The U.S. Centers for Disease Control and Prevention has monitoring systems in place, and hopefully they will catch the little booger sooner rather than later if it surfaces on U.S. soil.

The omicron variant has been detected at faster rates than previous surges have been, suggesting it may have advantages over other variants.

It is a little telling as to the strength of this variant that cases of the coronavirus have been surging in Africa ever since omicron was detected.

The variant has caused a particularly sharp rise in cases in the city of Pretoria, where it went from being essentially undetectable several weeks ago to now dominating the outbreak in a major city.

So, why is it spreading so quickly?

Scientists believe the omicron variant has a bunch of troubling mutations from the original COVID-19. They say that these mutations can transmit at a crazy fast rate, and that means it’s easier for the virus to infect cells.

BUT, the scientists do put a little caveat on their hypothesis: there isn’t yet enough data and information on omicron to be completely sure that this is the case.

What about the vaccines?

There just isn’t enough information on the omicron variant yet. But, they might work?

Let me be clear, there is no data at the present time to indicate that the current vaccines would not work.

Dr. Francis Collins, director of the National Institutes of Health

What are the symptoms of the omicron variant?

So far, the symptoms have been described as “extremely mild.” Okay. That sounds good — I can do “mild.”

There have been complaints of flu-like symptoms: tired, body aches, headache, scratchy throat.

So, kind of the same thing we have seen thus far with the coronavirus — just more mild.

What we are seeing clinically in South Africa — and remember I’m at the epicenter of this where I’m practicing — is extremely mild, for us [these are] mild cases. We haven’t admitted anyone, I’ve spoken to other colleagues of mine and they give the same picture.

Is this our “new” normal? Are we just going to have to live with this thing forever? It’s sure feeling like it.