When I was thirteen, my dad was bullied out of his job. People decided to spread rumors, his boss used those to fire him, and then his boss told him that fighting back would lose him his severance package. We needed that severance to find a new job and move (again), so my dad kept his mouth shut.

Not at home, though.

That’s how I learned that my dad’s boss made the absolute nicest guy cry in meetings and would go into that guy’s office to torment him; how everyone had to sign in and out just to go to the bathroom; and how my dad got in trouble a week after a flat tire made him late because his boss wanted to yell at him in a meeting instead of in private. Years later my dad’s doctor told him he’d worked right through a heart attack. That man almost bullied my dad to death, and that’s how I found out adults get bullied, too. 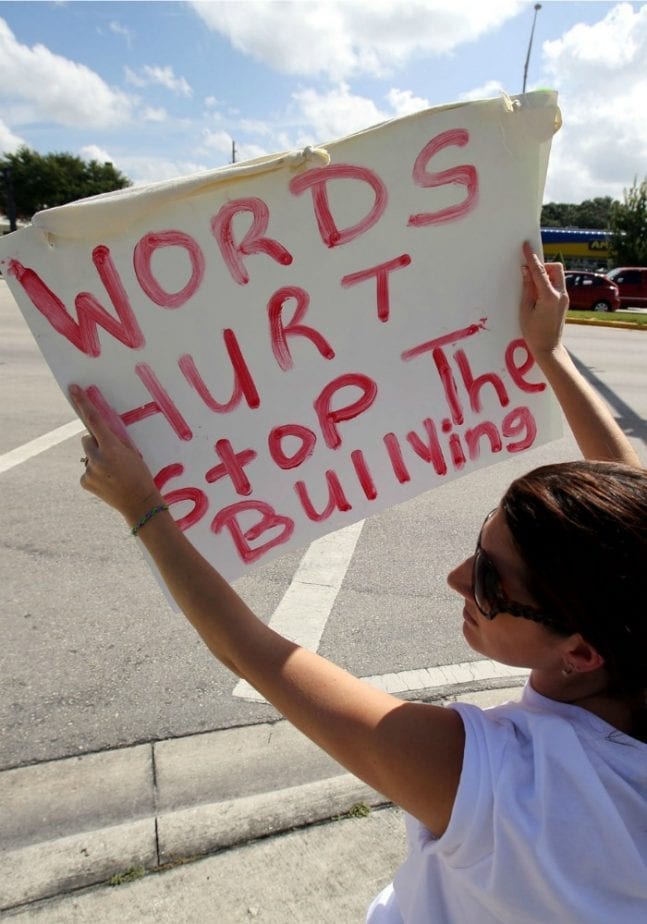 Adults Get Bullied, Too

Even my mom seemed beaten down—people who’d once been her friends stopped talking when she approached.

Did I mention my dad worked at a church? No? Okay. That’s why they could get away with treating my parents like crap. It is really easy in a faith-based setting. Much easier than, say, working out differences.

After that whole mess, at my next school in the new town we moved to for my dad’s much friendlier job, I was a fourteen-year-old freshman and my brother was a high school senior. My brother was excited that our new school allowed facial hair, so he grew out a huge bushy goatee, but he also had to take a combo health/P.E. class that his previous school had exempted him from.

It was mostly freshmen.

So picture this: my brother, a hulking hairy giant among the delicate freshmen boys with their twig-like limbs and greasy Eminem haircuts, and a small group of those boys is asking him, regularly, if he is a narc. Because why else would he be in that class?

And one of the boys, paranoid as hell, convinces himself that my brother is there to find drug users and turn them in.

And that kid, who my brother could straight-up break in half, gets aggressive.

At first it’s just words. Relentless accusations and abuse. Then one day they’re in the gym and this kid throws a basketball at my brother’s head. My brother, sitting by a wall and reading, gets his head slammed back against concrete bricks and gets a headache so piercing that he can’t even think.

The coach in charge of their class, seeing that my brother is this huge guy, doesn’t see a problem. He and the drunkard principal say, “Boys will be boys.” He doesn’t know that my brother is a pacifist, that he wants to go into the ministry, that he quit his previous school’s football team because he was afraid of hurting anyone, or that he found his niche in the debate club.

He just saw a guy who could easily break those buttholes’ skulls open on the floor. Why should he intervene if my brother is so clearly physically superior?

So he does nothing, and my mom goes Godzilla on the administration’s nutty buddy when she finds out, and they still do nothing.

And one day, that punk bparanoid drug addict gets a steroid-infused football player to waylay my brother on the way to the buses. And the football player pins my brother against the side of the school and starts making death threats.

It’s only my brother’s quick debate-honed tongue that lets him talk the guy down and convince him that Punk is just paranoid.

We didn’t hear about it until after my brother graduated. I like to imagine my scrawny glasses-wearing self there, with my childishly long hair, giving that football player crap and ordering him to put my big brother down or else and then kicking and biting and scratching like only a scrawny little girl can.

I also imagine going back to our old church and heaping shame on everyone who treated my parents like dirt, probably while shaking them violently by the shirtfront. I imagine slapping that old bastard who worked my dad almost to literal death and who claimed to be a Christian while torturing his subordinates.

Let’s be honest, sometimes I imagine punching people in the face.

I was helpless. Both scenarios. I was a kid. I couldn’t help, couldn’t stop it, couldn’t seek justice for the people I loved most in the world.

And that’s why I hate bullies. Why I get genuinely angry any time I see it happening. Why I want to go fists of fury, scorched earth, full kamikaze, and burn the house down on both our heads.

I have never in my life been violent, but bullying? I expect that, someday, someone’s gonna need to hold me back.

Thank you for speaking up for adults who are being bullied. When I was being bullied at church I went to the counselor who was so shocked to hear there was bullying going on at our church. When she found out it was an adult who was the victim her response was relief, as if the victim being an adult meant it was nothing to be concerned about. When I asked that the Pastor intervene, the Pastor's response was the victim should just work it out on their own. The problem has never been solved, and the victim received no help.