Imagine being so exhausted that you fall asleep propped on a bag of charcoal. For Deputy Sheriff Robert Goerlitz of Harris County, Texas, these brief moments of rest are all he is going to see until the work is done. A former marine and now law enforcement official for 25 years, Bob Goerlitz has faced his share of exhausting situations. But he’s sworn to protect his community and come hell or high waters, that is exactly what he’s going to do. After working countless hours rescuing those affected by hurricane Harvey, this officer passed out. 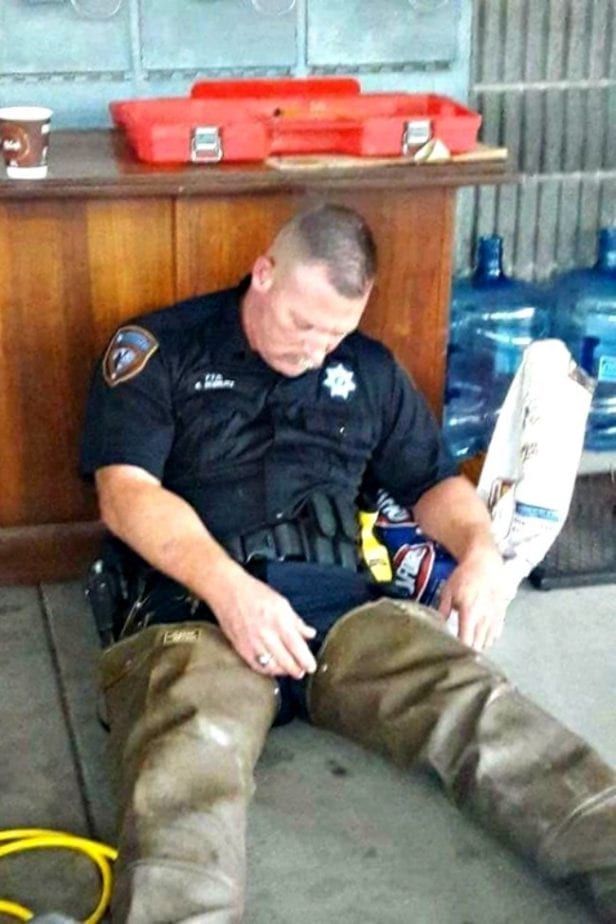 After Working Countless Hours Rescuing Those Affected By Hurricane Harvey, This Officer Passed Out

After days of deluge, weather reports are indicating that Harvey is heading back out to the Gulf of Mexico, but this is not good news for the residents of Houston, Texas. Rather than breaking up, this storm is said to be gathering more water and will head back inland, back over Houston, before it is done.

Deputy Sheriff Goerlitz and many countless other first responders have been working around the clock to aid residents stranded in the massive flooding, and rescue those who are not able to get away. In a county that is roughly the size of Delaware, with a population four times larger than the population of Manhattan, there is a lot of work to be done.

Many are wondering why an evacuation order wasn’t called in for Houston before the hurricane made landfall, but those of us who remember Rita know exactly why: it just couldn’t be done.

See, back in 2005 when hurricane Rita made landfall, Houston residents and the rest of surrounding Harris County were all evacuated. Only, because of the massive amount of people and the lack of resources along the roadway, the evacuation order left more stranded and dying than would have been affected by the actual hurricane. People are said to have spent more than 22 hours in hot cars. They ran out of gas. Batteries died. 24 nursing home evacuees died when their evacuation bus caught fire and first responders could not get to them.

So for Harvey, Texas knew things had to be done differently. But that means a lot of work for Goerlitz and his fellow heroes.

And that’s what we should take away from this: it is easy to focus on all the scary news that’s happening right now in Houston and around the world, but that shouldn’t make us lose sight of the fact that heroes walk amongst us.