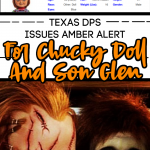 Ok, so right now Texas has a bit of some drama going on. By now you’ve heard of Jason Collier, right? Well, if that wasn’t crazy enough…

Texas DPS sent out an Amber Alert for the ‘Chucky’ doll and his son Glen. Y’all, I’m not even kidding.

An alert published from the Texas Alerts system was an actual Amber Alert for the ‘Chucky’ doll and his son Glen this morning in San Antonio.

The Amber Alert listed the doll from ‘Child’s Play’ known as ‘Chucky’ as the suspect in the abduction of ‘Glen’, the son of ‘Chucky’… the dolls.

They also described the clothing he was wearing as blue denim overalls with a multi-colored striped long sleeve shirt and wielding a kitchen knife prior to the disappearance.

The abducted child was listed as ‘Glen’. He was listed as 5 years old, weighs 6 pounds, stands 2’3″. He was also listed as having red, auburn hair, and blue eyes.

They described the clothing ‘Glen’ was wearing as a blue shirt with a black collar prior to going missing.

I am laughing so hard as I write this. Life is truly stranger than fiction these days.

Kens 5, a local news source reached out to DPS as to why this happened and got the following reply…

This alert is a result of a test malfunction. We apologize for the confusion this may have caused and are diligently working to ensure this does not happen again.