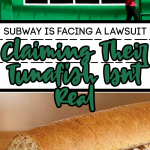 There’s something fishy about Subway’s tunafish, so let’s just dive right into the details.

According to a recent lawsuit filed against the big chain sandwich shop, the tuna in your tunafish sandwiches are anything but tunafish according to two unhappy Subway customers.

Apparently what Subway has been claiming is tunafish, is rather a “concoction of various mixtures that does not include tuna”, according to the complaint.

What filed last week at the U.S. District Court for the Northern District of California on behalf of Karen Dhanowa and Nilima Amin, the two believe they “were tricked into buying food items that wholly lacked the ingredients they reasonably thought they were purchasing,” based on the lawsuit.

An attorney representing one of the woman, Alex Brown from Lanier Law Firm in an email to CBS MoneyWatch stated they are currently conducting tests on the tunafish to determine what ingredients are used and so far, “The lab tests thus far have only told us what it isn’t.”

Subway has since denied the claims the lawsuit has filed and said,

“There simply is no truth to the allegations in the complaint that was filed in California,” Maggie Truax, director of Global PR, said in an email to CBS MoneyWatch “Subway delivers 100% cooked tuna to its restaurants, which is mixed with mayonnaise and used in freshly made sandwiches, wraps and salads that are served to and enjoyed by our guests.”

On Subway’s website, the fast food restaurant describes their sandwiches as “flaked tuna in brine, mayonnaise and a flavor-protecting additive.”

“Unfortunately, this lawsuit is part of a trend in which the named plaintiffs’ attorneys have been targeting the food industry in an effort to make a name for themselves in that space,” Truax said.

Keep in mind that if the lawsuit does become certified as a class-action, the suit could potentially represent thousands of customers who bought tuna sandwiches or wraps after January 21st, 2017 in California.

Talk about a lot of tunafish.

As you might remember, this isn’t the first time Subway has been called out on their food products, aka, the bread they use on their sandwiches.

All there’s left to do is to wait and find out if Subway’s tunafish is really what they claim it is.